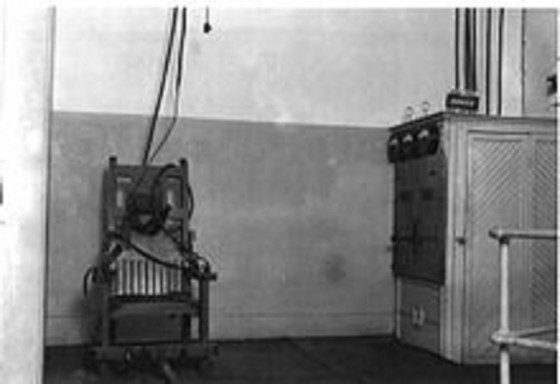 In January 1935, Bubbles Clayton and James X. Caruthers were convicted for the r*pe of a white woman, Virgie Terry, in Mississippi county. The case drew national attention to the Arkansas criminal justice system and became widely known as the Arkansas “Scottsboro” Case.

Clayton, age twenty-one, and Caruthers, age nineteen were arrested in Blytheville, Mississippi County. The two young men were charged as suspects in the armed robberies of couples parked in cars. After the arrest followed an incident in which Sheriff Clarence Wilson was injured in an attempted robbery while in a parked car near the Blytheville Country Club.

The men were removed from the county jail by authorities on the pretense of protection from mob violence; the two men were beaten with rubber hoses to secure confessions, then transported to Memphis, Tennessee. They were then taken to a death row cell at Tucker Prison Farm, 140 miles away, where they were held without bond or access to a lawyer.

Caruthers and Clayton were never tried in the robbery cases, but a couple of months later, Sheriff Wilson and Deputy Arch Lindsey drove Virgie Terry and Wiley Bryant to the State Penal Farm where they identified both men as the “masked” men who alleged r*ped Virgie Terry and assaulted her boyfriend on December 21, 1934.

On April 1, 1935, the men were indicted for the r*pe. All local lawyers declined to defend them, so Judge Neil Killough appointed Arthur Adams of Jonesboro and set the case for trial on April 8.

Adams decided not to challenge the racial composition of the all-white grand and petit juries, although the county (thirty-eight percent black) had a long history of excluding minorities from the jury pool. Adams picked at the state’s case based only on the testimony of white witnesses, particularly attacking the unorthodox identification of the defendants, who were said to be wearing caps and masks during the alleged crime on a rural road in the dark of night. Prosecuting Attorney Denver Dudley discounted their alibis, mentioned previous arrests, freely played to racial fears, and secured guilty verdicts that same evening.

White citizens in Blytheville took the case to the office of the NAACP in Little Rock. The NAACP hired an interracial group of attorneys for various appeals over the next four years, including John R. Thompson, John Hibbler, Lewis Rhoton, J. R. Booker, and Scipio Jones.

The case was called the “Second Scottsboro Case” by the Pittsburgh Courier, an appellation embraced by the Atlanta World, the Baltimore Afro-American, the Chicago Defender, and other newspapers, drawing a comparison between the Arkansas case and the Alabama r*pe convictions of nine black teenagers.

Clayton and Caruthers were convicted by the Arkansas Supreme Court in November 1935, and a rehearing was denied in January 1936. On June 5, 1939, after more than four years of appeals, the U.S. Supreme Court declined to hear the case. The NAACP attempted to secure executive clemency. Thurgood Marshall was assured that Governor Carl Bailey would return from the World’s Fair before June 30 and would hold a hearing on clemency, however, that did not happen. Lieutenant Governor Bob Bailey received more than 200 letters and telegrams supporting clemency, but he refused to conduct a hearing or issue a stay.

Clayton and Caruthers were executed on June 30, 1939. Caruthers was said to have confessed while in the electric chair, but Clayton maintained his innocence to the very end.