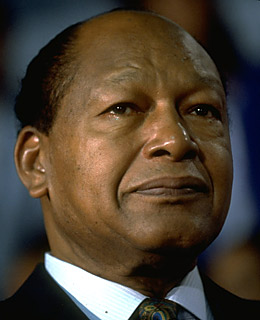 Thomas J. “Tom” Bradley was the 38th Mayor of Los Angeles, serving from 1973 to 1993. He made history when he was elected mayor of Los Angeles. became the first African American mayor of a major American city with an overwhelmingly white population.

Bradley was the son of sharecroppers and grandson of slaves. Born in rural Calvert Texas, Bradley’s family moved to Los Angeles when he was 7 years old. He was raised by a single mother, and excelled in school. He was an ambitious student, who was later able to attend UCLA, where he became a record-breaking track star and team captain. He was also classmate to Jackie Robinson.

At UCLA, Bradley joined the prestigious black fraternity Kappa Alpha Psi, which helped him learn how to negotiate the complexity of a predominantly white institution. It was through this important social network, that he made friends and created relationships, which became the foundation for his life.

Bradley served as a Los Angeles Police officer for 21 years, reaching the rank of Lieutenant, the highest position that a black officer could receive at the time. After graduating from law school, he resigned from the LAPD.

In 1963, he was elected to the Los Angeles City Council in the racially mixed 10th District, supported by a multi-ethnic coalition led by African American civic and church leaders.

In 1968, Dr. Rev. Martin Luther King, Jr. and presidential candidate Robert Kennedy were assassinated within months of each other; anti-Vietnam war and black power demonstrations escalated; and more than 20,000 students in five East L.A. schools walked out, protesting racial inequality and injustice. It was in this atmosphere that two-term City Councilman Tom Bradley decided to challenge Sam Yorty in 1969 for mayor of Los Angeles. It was a long shot.

The runoff turned ugly as Yorty ran an aggressive campaign infamous for its racism, exploiting fears and uncertainty. Yorty accused Bradley as being “anti-police” and asserted a majority of the police force would resign if Bradley were elected. He also implicated Bradley of running a campaign powered by “black militants, white radicals and Communists.” Bradley played down race as an issue as Yorty fueled the flames, but to no avail. Bradley’s message of hope and change was smothered in the ashes, and he lost the election.

Then in 1973, Bradley did the almost impossible, he won the LA mayoral primary and runoff and made history by becoming the first African American mayor of a major U.S. city elected with an overwhelming white population. He held the position for five terms. Bradley did not seek a sixth term and announced his retirement in 1993. Three years later, he suffered a stroke, which left him partially paralyzed and unable to speak for the rest of his life. In 1998, he died of a heart attack. Tom Bradley was 80 years old.