Dick Pointer: The Bravery of This Black Slave Saved the Lives of 60 Settlers at Fort Donnally, WV

Dick Pointer was a black slave who helped save over seventy settlers in Greenbrier Valley, West Virginia. Pointer was described as a large powerful man with very black skin, he was the slave of Colonel Andrew Donnally.

Settlers had been warned that a band of Shawnee Indians had left Ohio Valley with the intentions of attacking the Greenbrier settlements. Knowing the danger, the settlers decided to stay and shelter at Fort Donnally near Lewisburg.

On the morning of the attack Pointer along with a white man, Philip Hammond, were the first to hear the alarm, given by settler William Hughart as he rused to close the fort door on the attacking Indians.

The Indians began hacking at the door with tomahawks. Their effort failed due to the quick thinking of Pointer and Hammond, who rolled a hogshead of water behind the door. Pointer also managed to fire at the invaders, thus alerting the sleeping settlers of the danger.

The surprised settlers fought the Indians as they jumped from their beds. At dark, the Indians retreated and the attack was over. Pointer was rewarded for his bravery and granted a life lease to a piece of land, where he lived until his death at about age 89 in 1827.
In 1795, the thankful friends of Dick Pointer petitioned the Virginia Assembly for his freedom but were refused, although he was purchased and freed in 1801.   In 1976, a stone was dedicated in Lewisburg to honor Dick Pointer’s heroism. 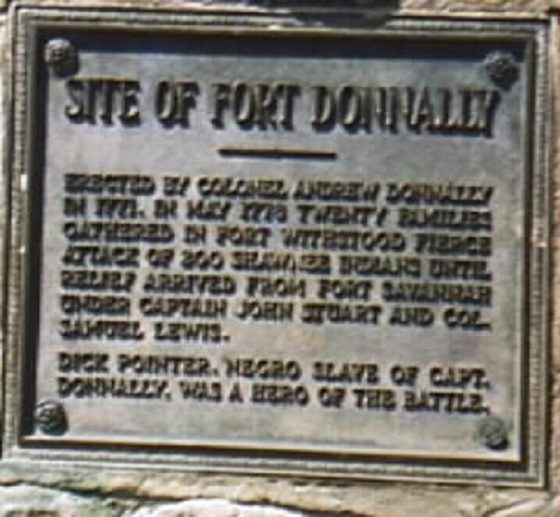 Dick PointerFort Donnally
« Previous PostHarlem Race Riot of 1935 Next Post »Zeke Miller: Deputy Sheriff Who Never Had to Shoot a Man to Make an Arrest