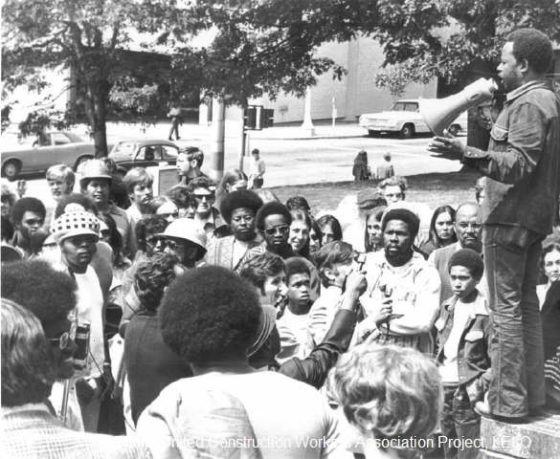 Scott, an electrician, grew up in Texas, and later moved to Seattle in 1966 where he became a leader in the Central Contractors Association. This organization of minority workers led many peaceful demonstrations against discriminatory hiring practices in Seattle’s construction industry in the summer and fall of 1969. Through the protests, the issue of discriminatory employment was noted by the American Friends Service Committee. After investigating the situation, the American Friends Service Committee approached Scott and the leadership of the Central Contractors Association and proposed a new community-based organization that would organize minority workers to fight discrimination in the unions and in the construction trades. The United Construction Workers Association was founded in 1970 with financial support from the American Friends Service Committee.

The Association saw an early victory in the class action suit United States vs. Ironworkers Local 86 et al., in which the United States Department of Justice sued five local unions and apprenticeship and training committees under Title VII of the 1964 Civil Rights Act. In 1970 Judge William J. Lindberg found that there had indeed been racial discrimination in the practices of all institutions named in this case. He ordered wide-ranging relief programs, including quotas for union membership, hiring, and apprenticeship classes and changes in hiring and dispatching procedures.

In the late 1970’s Scott became less involved in the activities of the United Construction Workers Association, and the organization faded out of existence around 1981. Scott retired from the electrician’s trade and remained active as a board member for the Labor and Employment Law Office until his death in 2003.