Francis “Frank” Johnson was a composer and a bandmaster. At one time, it was believed he was born in Martinique in the West Indies, but now records allege that he was actually born in Philadelphia. He first came to widespread public notice in 1818 when George Willig published Johnson’s Collection of New Cotillions.

By 1819, Johnson was well-known in Philadelphia as the leader of a dance orchestra. He could play just about any instrument. including the bugle, keyed bugle, cornet, and violin.

Johnson’s career flourished throughout the 1820s as he and his band performed at most of the major dance functions in Philadelphia, including dancing schools, balls, and private parties. His talents were also in demand from military regiments in the city. The Washington Guards Company Three Band (which later became The Washington Grays), the State Fencibles Regiment, and the First Troop Philadelphia City Cavalry all employed Johnson and his musicians.

In 1824, Johnson’s reputation was further enhanced when he composed much of the music for the triumphal return to Philadelphia of Revolutionary War hero General Lafayette, who was traveling the United States to great public acclaim and celebration.

However, Johnson’s career was never far from the ugliness of racism. White bands often refused to participate in parades when Johnson’s band was scheduled to appear, and when the band toured to St. Louis, Missouri, its members were arraigned, fined, and ordered from the state under laws prohibiting the entry of free Blacks. At the time of Johnson’s death in 1844, he had over 200 published pieces and many that went unpublished. 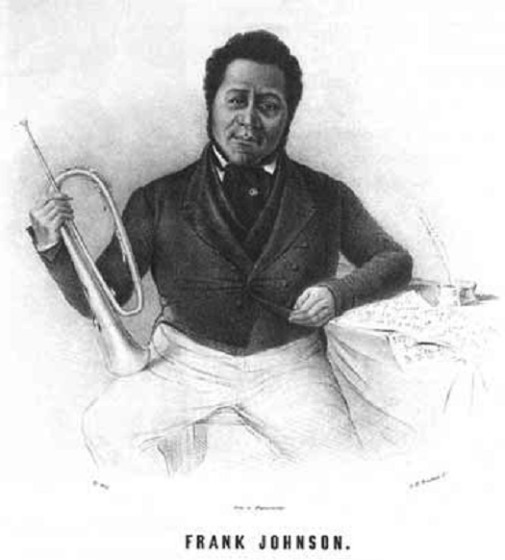