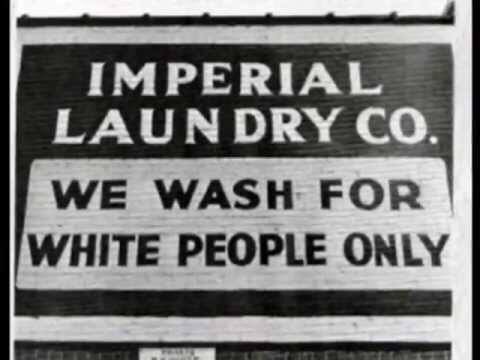 The first priority of the new Jim Crow state governments was depriving black people of the vote. Since the 15th Amendment said voting rights couldn’t be denied on the basis of race, they used indirect tactics such as the poll tax, literacy tests, and grandfather clauses. Then came a flood of perverse laws and regulations aimed at segregating the races. These included separate railroad cars, streetcars, restrooms, drinking fountains and prisons. Elaborate rules dictated strict separation of the races in housing, healthcare, public entertainment and nearly every aspect of life. In schooling and other areas, facilities and services for black people were far inferior to those for whites. Through the early decades of the 20th century, Southern states continued to pile on new segregation rules which were, in Woodward’s words, “constantly pushing the Negro farther down.” Racist legislation was accompanied by racist violence, with lynchings and in some cases mass murder of African Americans.

Ending Jim Crow required decades of resistance in many forms, mostly by African Americans in the South. The resistance included courageous union organizing by Southern workers in the 1930s and ‘40s against great odds. The tide of national opinion finally began to turn during and immediately after World War II, making possible large-scale protests against Jim Crow such as the 1955-56 Montgomery bus boycott and the Civil Rights Movement of the 1960s. This was one of the greatest moral crusades in American history, directed against one of the greatest evils in our history.

The legacy of Jim Crow is still with us in many forms. Housing and schools are still segregated in many places, black people often don’t receive equal education or job opportunities, or equal treatment by the police and courts. But we must remember that the original purpose of Jim Crow – and long before that, of paying wages to white workers while making slaves of black workers – was to keep working people from uniting. Laws that deprive workers of their rights to organize, bargain collectively, and strike are also a legacy of Jim Crow. We need to overcome all of this.

Jim Crow
« Previous PostJune 4: Ray Charles Made an Historic Reunion in Chicago On This Date in 1998 Next Post »The Work of Black Slaves On Southern Plantations