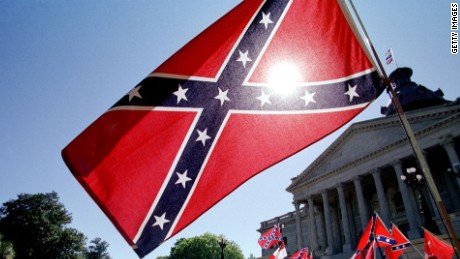 (CNN)America’s leading merchants have spoken: The Confederate flag is coming off the shelves. Walmart, Amazon, eBay and Sears all announced bans on the sale of Confederate flag merchandise, amid an intensifying national debate over the use of the controversial flag. The announcements are the latest indication that the flag, a symbol of the slave-holding South, has become toxic in the aftermath of a shooting last week at a historic African-American church in Charleston, South Carolina. Gov. Nikki Haley announced in a Monday afternoon news conference that she supports removing the Confederate flag from the state capitol grounds. Evolution of the Confederate flag 6 photos EXPAND GALLERY “We never want to offend anyone with the products that we offer. We have taken steps to remove all items promoting the confederate flag from our assortment — whether in our stores or on our web site,” said Walmart spokesman Brian Nick. “We have a process in place to help lead us to the right decisions when it comes to the merchandise we sell. Still, at times, items make their way into our assortment improperly — this is one of those instances.”