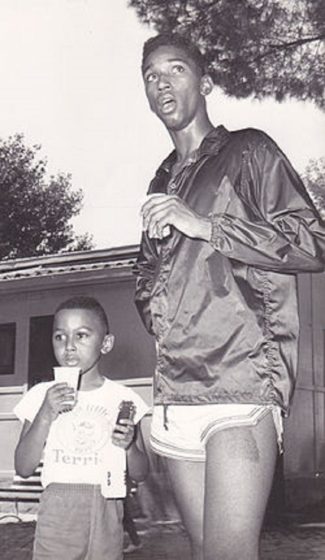 John Curtis Thomas was an American track and field athlete who set several world records in the high jump using the straddle technique. As a youth, he earned the Eagle Scout award.

Thomas was born in Boston and grew up in Cambridge, Massachusetts. His father Curtis was a bus driver and his mother Ida was a kitchen employee at Harvard University.

He graduated from Boston University in 1963 with a bachelor’s degree in physical and psychological rehabilitation.
Thomas retired from competition at the age of 27 and became a businessman. He later served as an assistant coach at Boston University and athletic director at Roxbury Community College.

Thomas’ meteoric career briefly captivated the track world, but he failed to win an Olympic gold medal, despite being favored to win in the both 1960 and 1964 Games. In 1960, he settled for the bronze medal behind Russia’s Robert Shavlakadze (gold), and Valeriy Brumel (silver). His failure on September 1, 1960 was accompanied by other failures that day by American favorites and the day become renowned as ‘Black Thursday’. Thomas was inducted in the USATF Hall of Fame.