Was the Original Model For The Statue Of Liberty A Black Woman? You Be The Judge

When I came across an article claiming that the original model for the Statue of Liberty was a black woman, I was blown away. Easy for me to believe, after all, most of the important history of this country related to  African Americans is either hidden or stolen.

When I started to research the topic, to my dismay,  I found lots of conflicting information. While the stories’ details conflict, most agree that  the sculptor, Frederic Auguste Bartholdi, was a strong abolitionist, the original model had a black face, chains on the hands and feet, and was changed significantly overtime.

According to Dr. Jim Haskins, a prolific Black author, what stimulated the idea for the creation of the statue initially was the part that Black soldiers played in the ending of Black African Bondage in the United States. It was created in the mind of the French historian Edourd de Laboulaye, chairman of the French Anti-Slavery Society, who, together with sculptor Frederic Auguste Bartholdi,proposed to the French government that the people of France present to the people of the United States through the American Abolitionist Society, the gift of a Statue of Liberty in recognition of the fact that Black soldiers won the Civil War in the United States. The original model had broken chains at her feet and in her left hand…as a reminder of blacks winning their freedom.

According to Elizabeth Mitchell, author of the new book Liberty’s Torch, Bartholdi did notcraft the basic design of Liberty specifically for America. As a young man, he had visited Egypt and was 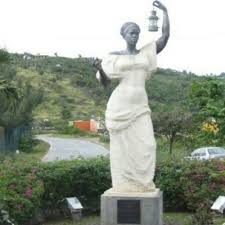 enchanted by the project underway to dig a channel between the Mediterranean and the Red Sea. At Paris world’s fair of 1867, he met with the Khedive, the leader of Egypt, and proposed creating a work as wondrous as the pyramids or sphinxes. He then designed a colossal woman holding up a lamp and wearing the loose fitting dress of a fellah, a slave, to stand as a lighthouse at the entrance of the Suez Canal. The Egypt deal fell through, so Bartholdi decided to adventure to America to pitch his colossus.

According to “leading” historians, there is no “original model” of the statue, sculptor Frederic Auguste Bartholdi’s design evolved through many changes before taking its final form. At first the “lady” held a broken chain in her left hand to symbolize breaking the chains of bondage. Instead, the artist later decided that a fragment of broken chain should be at her feet. 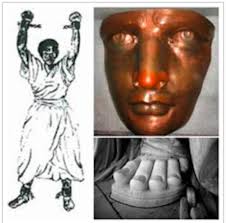 This was not changed, as some have suggested, to avoid offending a defeated South, but to allow her to hold the tablet in her hand inscribed with the date of the Declaration of Independence. This was a purely aesthetic choice.

It is true that the original face of the statue was dark in color.  However the material underneath the familiar green finish is copper, which is a dark metal. Due to  exposure to the elements the statue’s head soon turned pitch black. So that explains the picture published in the NY Post in 1896 showing the statue with a black face.

Bartholdi used two models for the sculpture, one was his mistress and future wife the other was his very own mother. Neither of these women were black. The “lady” has the face of Bartholdi’s mother and the torso of his wife.

The Original Statue of Liberty presented to the U.S. was a Statue of a…”Black Woman”. | Urban Intellectuals

« Previous PostBaddest of the Bad: Vincent "Rhygin" Martin Next Post »Did You Know That A Slave Was Responsible For The Inoculation Procedure Used To Treat Small Pox?