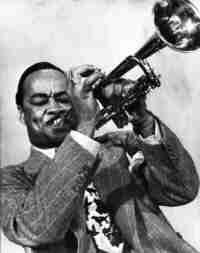 Jazz musician, Wilbur Dorsey Clayton, was best known as the lead soloist with the first great Count Basie band until he was drafted into World War II.

Clayton was born on November 12, 1911 in Parsons, Kansas. Clayton came from a musical family that supported and encouraged him to explore jazz music. He learned to play the piano at six-years-old from his father. By 17, he was playing the trumpet. After high school, he moved to Los Angeles. He later formed a band named “14 Gentlemen from Harlem” in which he was the leader of the 14-member orchestra.

There are multiple sources claiming different ways in which Clayton ended up in Shanghai. Many people claimed that Clayton was picked by Teddy Weatherford for a job at the Canidrome ballroom in the French Concession in Shanghai. Others claimed he escaped the US temporarily to avoid racism.

From 1934 or 1935 (depending on the sources), he was a leader of the “Harlem Gentlemen” in Shanghai. Some of the bureaucratic social groups he was with included Chiang Kai-shek’s wife Soong Mei-ling and her sister Ai-ling, who were regulars at the Canidrome. He eventually left Shanghai before the 1937 Second Sino-Japanese War. Clayton is credited for helping to close the gap between traditional Chinese music and shidaiqu/mandopop.

From 1937, the Count Basie orchestra was based in New York, giving Clayton the opportunity to freelance in the recordings studios, and he participated in recordings sessions featuring Billie Holiday and was also present on Commodore (and later Keynote Records) sessions with Lester Young. Clayton remained with Basie until he was drafted for war service in November 1943.

Following the war, Clayton arranged music for Count Basie, Henry James, and Benny Goodman, as well as continuing to tour and record. Clayton was noted for his ensemble and solo work, particularly with Lester Young and Billie Holliday.

Shortly after appearing at the New Orleans Jazz Festival in 1969, Clayton underwent lip surgery, and had to give up playing the trumpet in 1972. He was able to resume playing in 1977 for a State Department sponsored tour of Africa, but had to permanently stop playing in 1979. He taught at Hunter College, in New York from 1975-1980. Buck Clayton died quietly in his sleep in 1991.