10 Facts You Should Know About Civil Rights Activist James Bevel

James Bevel was a leader of the 1960s Civil Rights Movement. He worked closely with Dr. Martin Luther King Jr. Bevel, and was the Director of Direct Action, as well as the Director of Nonviolent Education of the Southern Christian Leadership Conference. Here are 10 other facts if you don’t know you should about the civil rights leader.

1.  Bevel was born in Itta Bena, Mississippi on October 19, 1936. In his teens, he experienced a religious revelation and became known throughout his town as a young and inspiring preacher.

2.  He was ordained as a Baptist minister in 1959, and received a B.A. degree from American Baptist Theological Seminary in Nashville, Tennessee.

3.  In 1960, Bevel became one of the founding members of the Student Nonviolent Coordinating Committee (SNCC), a grassroots civil rights organization.

5.  He married Diane Nash, a SNCC activist, and moved to Albany Georgia in 1962. 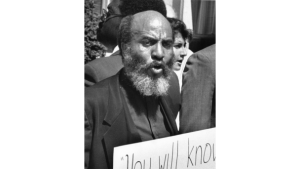 6.  Bevel got involved in a wide range of social and political issues. During the summer of 1966, he worked with the Nonviolent Human and Community Development Institute. He took a leave of absence in 1967 from SCLC to become executive director of the Spring Mobilization Committee to End the War in Vietnam.

7.  He was one of Dr. King’s most effective front-men and dedicated workers. Bevel was a symbol of the new generation leaders which included Jesse Jackson, Hosea Williams, and Andrew Young. He might not have been as well-known as the other activists but his contributions and work did not go unnoticed.

8.  In 1963, Bevel received the Peace Award from the War Resisters League, and in 1965, he was awarded the prestigious Rosa Parks award by the SCLC.

9.  In 1980, Bevel’s political beliefs shifted, he campaigned for Ronald Reagan, and four years later he ran unsuccessfully as a Republican for the House of Representatives from Chicago.