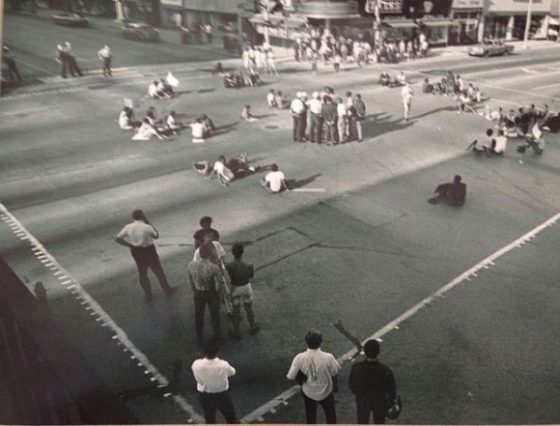 The 1967 Saginaw riot was one of 159 race riots that swept cities in the United States during the “Long Hot Summer of 1967”. This riot occurred in Saginaw, Michigan, on July 26, 1967. Tensions were high across Michigan that week as the 1967 Detroit riots in nearby Detroit had been escalating since Sunday July 23.

On July 25, 1967, officers surrounded a house full of black people and shot into the house, wounding several people. Two days before that on July 23, Detroit set the tone for other cities all over the country to follow in their footsteps. Cities were impacted by what some called riots – cities burned, businesses were looted, and people were arrested. However, some officials believed what took place in Saginaw was a revolt, not a riot.

Saginaw mayor Henry G. Marsh chose to only meet privately with Civil Rights leaders in a conference closed to members of the public, the public started a protest. The Saginaw News reported that the demonstrators were demanding an open housing ordinance, more jobs for local youth, eliminate slum housing, stop harassment and intimidation of black employees who stand up for their rights, recognize and respect grassroots black leaders. White and black people participated and were demonstrating for hours. The protestors were met by riot police at City Hall and began getting out of hand, eventually turning into a riot that spread through downtown and into the neighborhoods of Saginaw. In all, 7 people were injured, 5 of whom were civilians and 2 were police.

The next youth to be killed, Pollard, was shot and killed by officer Ronald August after he took him into Annex Room A-3.  August later admitted to the killing but claimed it was in self-defense. The third person to die, Temple, was shot by Detroit Police Officer Robert Paille who also claimed he killed him in self-defense. Despite the three deceased bodies in the Motel Annex, the Detroit police officers on the scene, Paille, August, and David Senak, did not report any of the deaths to the Detroit Police Homicide Bureau as required.  Instead they left the annex after demanding that the survivors keep quiet about the incident.