William B. Gould: Former Slave and Veteran of the American Civil War 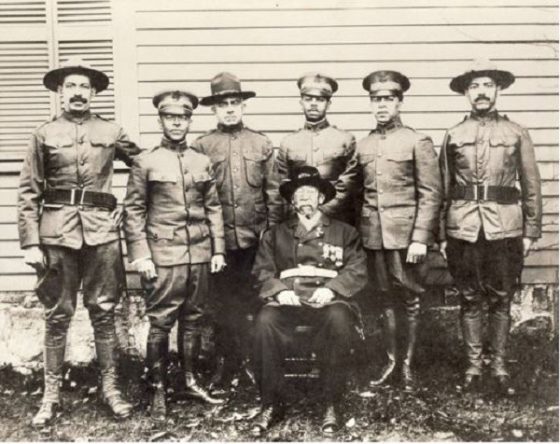 Gould photographed with his six sons.

William B. Gould was a former slave and veteran of the American Civil War. Gould was born to a slave woman and perhaps an Englishman.

On September 21, 1862,  Gould escaped slavery with seven other slaves by rowing a small boat 28 nautical miles down the Cape Fear River and out into the Atlantic Ocean where the USS Cambridge of the Union blockade picked them up as contraband. Prior to the escape, Gould had been working as a plasterer at an antebellum mansion in Wilmington, North Carolina. At the time of his escape, he appears to have been owned by Nicholas Nixon, a peanut planter and slave owner in Wilmington.

After escaping, Gould joined the U.S. Navy and believed he was “defending the holiest of all causes, Liberty and Union.” Beginning with his time on the Cambridge and continuing through his discharge at the end of the war he kept a diary of his day-to-day activities. Gould’s Diary is one of three known diaries in existence written during the Civil War by former slaves. In the diary, Gould chronicles his trips to the northeastern United States, the Netherlands, Belgium, Spain, Portugal, and England.

After being discharged from the Navy at the Charlestown Navy Yard in Massachusetts, Gould married Cornelia Read in November 1865. Cornelia was a former slave who was then living on Nantucket and they corresponded throughout the war. The Goulds moved to Milton Street in Dedham, Massachusetts, and together they had two daughters and six sons. In Dedham, Gould “became a building contractor and community pillar.” William Benjamin Gould died on or about May 25, 1923, at the age of 85.