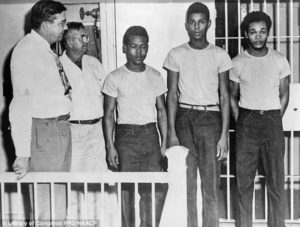 Charles Greenlee, Samuel Shepherd, Walter Irvin, and Ernest Thomas are all featured in this photo.  Approximately seven decades ago, 68 years to be precise, four African-American men were falsely accused of raping a 17-year old girl- Norma Padgett in the Lake County, State of Florida, U.S.A. The four men- Charles Greenlee, Samuel Shepherd, Walter Irvin, and Ernest Thomas were unjustly treated by being sentenced to life imprisonment before the severe beatings in the jail cells; unfortunately, some of them were brutally killed in cold blood. The four men were later called the “Groveland Four” or “Groveland Boys,” and their case is famously known as the “Groveland Four Rape Case.” Norma Padgett and her estranged husband reported to the police that they encountered the four men when their car got a mechanical damage and pulled over by the roadside. The four then came out of their car and caught Padgett, and repeatedly raped her at the back seat of the damaged car. However, after relocating to Tennessee with his family upon his 1962 parole, Shepherd’s daughter reported that her father affirmed to her that he never knew the teenage girl he was accused of raping. Indeed, he had never even set his eyes on the lady (Norma Padgett) until the day of their first trial at the court.

Out of the four young men, one was killed shortly after a few days of the accusation. The remaining three were convicted and brutally beaten while in custody to confess the allegations, which were later found to be false. During their first trial, Shephard and Irvin were sentenced to death sentence while Greenlee was sentenced to life imprisonment; at the age of only 16 years. Later on, while on their way to a retrial, two (Irvin and Shepherd) were shot by the roadside by a sheriff- McCall Willis, who cited that the handcuffed men tried to escape. Unfortunately one (Shepherd) died on the spot while the survivor (Irvin) confirmed that they were shot in cold blood. During his second trial, Irvin later appealed to the U.S. Supreme Court, which denied the case. As well, the Governor at the time also rejected the clemency appeal by Irvin and, instead, ordered and scheduled his execution.

Greenlee was paroled by 1962 and later died in 2012. In 1968, Irvin’s sentence was commuted by the former Governor- Collins LeRoy and was paroled in 1968. He died two years later from a heart attack while attending a funeral at Lake County.

More than half a century later, the Florida House is on the verge of apologizing to the families, friends, as well as the concerned citizens for the 1949 racial injustice. The dramatic criminal case, marred with gross injustice and racial hatred drew the national attention when the Fla. House of Representatives on 18th April 2017 announced the exoneration of the Groveland Four. Both Lake County and the city of Groveland offered apologies to Groveland Four, and well as their families, and also lobbied the state lawmakers to follow the same suit of action. As such, the Florida House of Representatives unanimously apologized and exonerated the four men. The Fla. House also urged the incumbent Governor- Scott Rick to expedite the procedures for granting the posthumous pardons.

Read more of the original story via https://www.washingtonpost.com/news/morning-mix/wp/2017/04/19/were-truly-sorry-after-68-years-florida-apologizes-for-racist-history-of-groveland-four/?utm_term=.0e90caf8bf5f”

« Previous PostAbsurd Reasons Why Blacks Were Admitted to the "Central State Lunatic Asylum For the Colored Insane" Next Post »Schooled by Youtube: Black Reconstruction. We Aren't PROGRESSING. We're REPEATING!