Back Story: Jackie Robinson Was Not The First Man To Integrated Major League Baseball

Jackie Robinson was not the first to break the “color barrier” in baseball.

A man by the name of Moses Fleetwood Walker, a Michigan grad and catcher for the Toledo Blue Stockings, is actually the first African-American to play in Major League Baseball.

Shocked to hear that?

Now, before I go any further, this article is not meant to discredit what Jackie Robinson did in any way.

The courage he showed in literally risking his life to pursue his dream cannot be diminished, no matter the truth of the situation. Instead, I seek to shed light upon one of the greatest injustices in not only the history of American sports, but American society. 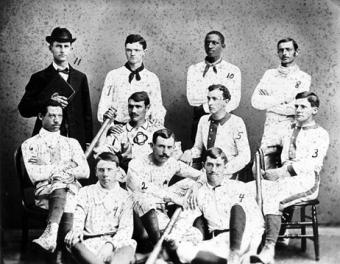 Moses Fleetwood Walker’s incomprehensible accomplishment on May 1, 1884 will never be celebrated by Major League Baseball. All 32 teams will never wear his number.

But, what Moses Fleetwood Walker went through—and what his successes meant for players like Jackie Robinson—can never be replicated or overstated.

Walker rose through the collegiate ranks after transferring from Oberlin College to the University of Michigan in 1882 and experienced immediate success. Walker batted .308 for the Wolverines and helped lead the team to a solid  10-3 record.

After finishing his career in Ann Arbor, Walker signed with the minor league team, the Toledo Blue Stockings of the Northwestern League in 1883. 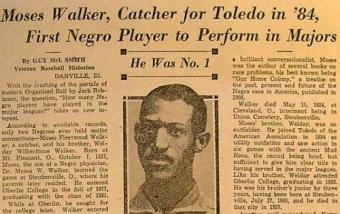 Being a starting catcher during this time was not ideal, especially by modern standards. Walker (like most catchers during the late 19th century in major league baseball) did not wear gloves and protection.This would became a large factor in contributing to the injuries that would prematurely end his career.

Even worse, Walker’s participation on the Blue Stockings caught the ire of one of the most famous players during this time period, Cap Anson, who refused to take the field opposite Walker if he was in the starting lineup. Eventually Anson relented, but this was the beginning of Walker’s struggles as he attempted to fulfill his dream to make the big leagues.

Despite these hindrances, Walker would catch a lucky break that would change the course of history in Major League Baseball.

In the beginning of the 1884 season, a burgeoning professional baseball league, the American Association (which would later become the modern-day American League) formed.

Its mission was to compete with the dominant baseball league of this team, the National League. One of the American Association’s first moves was to add the Toledo Blue Stockings to its list of participating franchises.

This meant that on opening day of the 1884 season, the starting catcher of the Toledo Blue Stockings would become the first African-American player to play a professional baseball game.

On May 1, 1884, against the Louisville Eclipse, Moses Fleetwood Walker took the field, and in doing so, officially broke the color barrier of Major League Baseball.