Bessie Brown was a 1920s cabaret, blues and jazz singer. She got her start in Cleveland, Ohio and went on to become a popular recording artist and draw on the East Coast.

Brown was born in Marysville, Ohio. She recorded between November 10, 1925, and April 1, 1929. In her concurrent vaudeville career, she sometimes performed as a male impersonator.

She was one of the city’s first musicians to go national and became a fixture in the Harlem Renaissance. The deep-voiced Brown was one of Cleveland’s most unique exports – working as a cabaret and vaudeville performer, sometimes as a male impersonator. Many of her songs boasted a toughness that would be considered empowered anthems today, like “Ain’t Much Good in the Best of Men Nowadays,” “He Just Don’t Appeal to Me” and “Song from a Cotton Field.” (A March 3, 1928 ad for a Bessie Brown show in The Plain Dealer alongside a compilation Brown’s works released by Document Records)

She also appeared in revues, including Moonshine Revue, The Whirl of Joy and Dark-Town Frolics, and on the stage as a cabaret performer, primarily on the East Coast. On her recordings she sang in a deepened tone, without any notable African-American dialect. Thus, to more than one commentator, her style was similar to that of Sophie Tucker.

She left the music industry in 1932 and married Clarence Shaw in the early 1930s. She had one child, Helen Smith Mcreynolds, from her first marriage. She died of a heart attack in 1955. 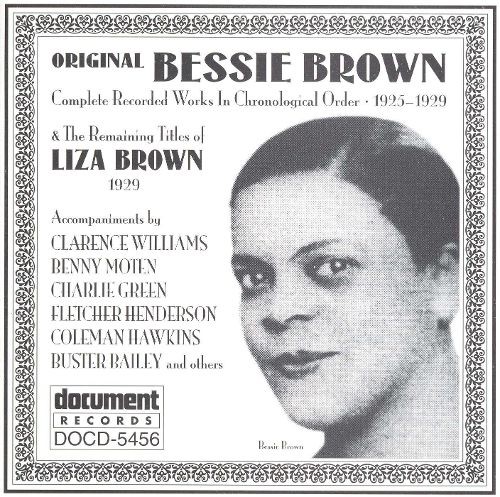