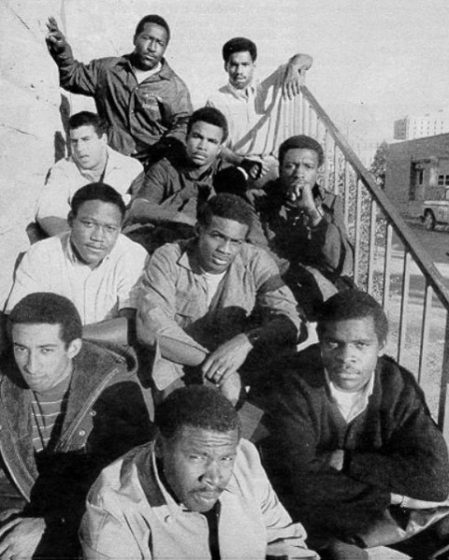 On October 17, 1969, Coach Lloyd Eaton dismisses 14 black football players from his team when they show up at his office wearing black armbands over their street clothes to protest what they see as racist policies of Brigham Young University (BYU) in Wyoming. The meeting caused quite the controversy and ended with the expulsion of the players who became known as the ‘Black 14.’

Head Coach of the University of Wyoming, Lloyd Eaton, won three consecutive Western Athletic Conference championships in the three previous years; won 31 of the previous 36 games; the team defeated Florida State in the Sun Bowl and nearly upset Louisiana State University in the Sugar Bowl on Jan. 1, 1968, after going undefeated during the 1967 regular season.

The UW football team was scheduled to play a big game on, Oct. 18, 1969. However, on a Friday morning, Oct. 17, 1969, the day before the big game. The 14 black players walked into the office of coach Lloyd Eaton’s wearing black armbands. The team was preparing to play BYU at War Memorial the next day. The players had a question. Could they wear black armbands in silent protest? The year before, in their victory at BYU, they complained, the BYU Cougars’ players taunted them with racial epithets. The Wyoming players had also learned the Mormon Church, which BYU represented, did not allow Blacks in the priesthood.

Eaton answered the question by citing a policy against protests, a rule neither black player had ever heard of and then answering the question with no! However, Coach Eaton took it a step further, he kicked all 14 off the team for the rest of the season. However, only three of the black men would play for Wyoming again.

Mel Hamilton, one of the Black 14 had left the team once before. Of all the players, he knew the most likely response from Eaton. A year earlier, Hamilton asked Coach Eaton to start paperwork for his pending marriage, but Eaton refused. Hamilton was told by Eaton, “he could not allow him to marry a white girl on the people of Wyoming’s land.”

Coach Eaton was known for his tough workouts and his love for the game. The Black 14 could not recall a time he uttered a racial epithet, until that day in October. The men were told by Eaton, they could go to Grambling State or Morgan State. They could just go back and get on ‘colored welfare.’ He refused to listen to what they had to say and responded with ‘shut-up’ when they tried to talk.

News about the expulsion spread around campus like a wildfire. Within a half-hour of their meeting, students approached players asking if they were boycotting the game. In the aftermath, most of the white students stopped talking to the players. Fistfights between some of the black players and white players broke out, and when some locals found out, they rode by the campus with shotguns hanging off the back of their trucks.

Without the Black 14 in that ’69 game, Wyoming still defeated BYU 40-7, then followed with a victory over San Jose State. But the damage was already done. Wyoming lost its last four games. Among the 14 were four offensive and three defensive starters, plus three key reserves.

A year later, the team fell to 1-9, and Eaton resigned, believing he had prevented the Black 14 from making fun of BYU’s religious beliefs.  Eaton stood firmly behind expelling the Black 14. He died of a stroke at age 88.

For many years after the incident, the Wyoming football team had trouble recruiting black players. The Cowboys did have one winning season in the 1970s but didn’t win another WAC title until 1987. Nearly all the members of the Black 14 went on to earn degrees and had successful careers.

A year after the Black 14, the first African-American played for BYU. In 1978, the Mormon Church dropped the policy excluding Blacks from the priesthood.

Black 14University of Wyoming Cowboys
« Previous PostSchooled By Youtube: BLACKS and the 4th of July...... Next Post »Opera Singer, Jessye Norman, Goes To Israel To Claim Wolf Prize For Music