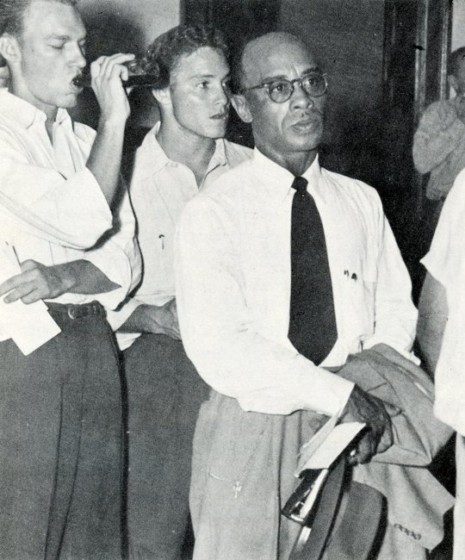 Heman Sweatt was a highly regarded educator, postal worker, and activist. He is most remembered for his role in the landmark  lawsuit “Sweatt vs. Painter.”

Heman Marion Sweatt was born on December 11, 1912 to James Leonard Sweatt and Ella Rose Perry. His father had attended Prairie View Normal School, graduated in 1880 and became a schoolteacher. He worked as a principal in Beaumont and then moved to Houston for better economic opportunity.

Sweatt grew up in a relatively desegregated area of Houston. Even though the area was mainly integrated, he still experience racism and Jim Crow to the fullest. After high school, Sweatt attended Wiley College in Marshall, Texas, and graduated in 1934 with a Bachelor of Arts degree. He was regarded as one of the most brilliant students at Wiley College, he later became a teacher and substitute principal in Cleburne, Texas.

He was regarded as one of the most brilliant students at Wiley College. In 1936, he became a teacher and substitute principal in Cleburne, Texas. In 1937, Sweatt attended the University of Michigan in order to become a physician. However, after the school year,  Sweatt decided to became a postal carrier and decided not to return to the University of Michigan due to the severe winters.

During the 1940s, Sweatt participated in voter-registration drives and raised funds for lawsuits against the white primary. Post offices stopped promoting blacks to supervisory positions by systematically excluding them from clerical positions that would make them eligible to be promoted. Sweatt wrote several columns for the Houston Informer and was a local secretary of National Alliance of Postal Employees; Sweatt was concerned with discrimination and challenged these practices.

By the mid-1940s he decided to go to law school; William J. Durham advised him to seek admission to the University of Texas School of Law, particularly since Durham knew there was no law school for blacks in the state. Sweatt not only sought admission but, responding to an appeal Lulu White made to a group of Houston blacks for a volunteer to file a lawsuit, also agreed to serve as the NAACP’s plaintiff if he was rejected on the basis of race. In the landmark case, Sweatt v. Painter, The United States Supreme Court ruled that separate law school facilities could not provide a legal education equal to that available at The University of Texas Law School, one of the nation’s ranking law schools. The Supreme Court affirmed Sweatt’s right to equal educational opportunity and in 1950, he entered the University of Texas School of Law.

Heman SweattHeman vs. Painter
« Previous PostSlave Revolt in Puerto Rico in 1821 Planned by Marcos Xiorro Next Post »Joseph Godfrey: Enslaved Man Escapes to Fight with the Dakota Against White Settlers