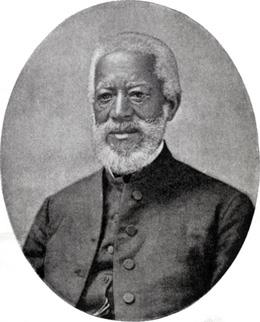 American slaveholders wanted Anderson extradited to stand trial for murder, while Canadian and British abolitionists felt that “a slave attempting to escape from bondage, and killing the person who attempted to re-enslave him, did not, according to the common law, commit murder, but justifiable homicide, and that the rendition of Anderson, would be a virtual recognition, on British soil, of the slave laws of the United States” (p. 34).

On Christmas Eve, 1862, Anderson, accompanied by black abolitionist ALEXANDER CRUMMELL, sailed on “the African Steam Ship Armenia” (p. 179). The details of his life in Liberia—as well as the date and circumstances of his death—are unknown.

Anderson a Freewill Baptist, on Christmas Day of 1850, married Maria Tomlin, a woman enslaved by a neighbor of the Burtons. They later had a child together. Sometime around August 1853, Anderson was sold to “a man of the name of McDonald, whose residence was thirty miles distant from . . . the owner of Anderson’s wife” (p. 11). McDonald forbade Anderson from visiting his wife and child and told him to “abandon and forget them, and take a new wife, or mistress” from McDonald’s female slaves (p. 11).

Anderson found this arrangement unbearable, and after sneaking away to visit his wife, child, and father-in-law, he escaped to the North. On his way, he encountered a white slaveholder named Seneca T. P. Diggs, who recognized him as a fugitive. Diggs led a manhunt to recapture Anderson, and during a confrontation in the chase, Anderson stabbed and killed Diggs before continuing on his way to freedom.

Anderson made his way to Windsor, Canada West (now Ontario), which he reached in September 1853. Worried that slave catchers from the U.S. and law enforcement officers might be looking for him, Anderson moved around different parts of Canada and lived under assumed names for the next five years. Eventually a friend betrayed Anderson to authorities, and he was arrested in April 1860, sparking a legal controversy:

Like Henry Highland Garnet, Alexander Crummell embraced the controversial belief that African Americans could, and should, return to Africa to colonize the nation of Liberia. The son of a slave father and a free mother, Crummell was born in New York City in 1819. Crummell was educated at the New York African Free School, and, as was the case with other graduates of the school, Crummell had difficulty gaining access to higher education. He attended schools in New Hampshire and Oneida, New York. He was ordained a minister at the age of 25. Unfortunately, race excluded him from equal commerce with white clergy in the United States, and he moved to England, where he received a degree at Queens College, in Cambridge.

Crummell spent over twenty years as a missionary to Liberia. In doing so, he occupied a thorny position—he came from a land which discriminated against his race, armed with the very beliefs in African inferiority that had made his own life so difficult. As a Christian minister, he sought to “civilize” Africans by bringing them Christianity to replace their own native customs and religious practices. In 1880, Crummell founded a school and a church in Washington, D.C.