The Liberator: William Lloyd Garrison’s Uncompromising Stand For The Complete Abolition Of Slavery 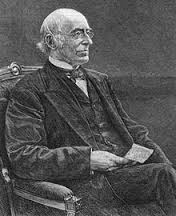 Garrison, William Lloyd, 1805–79, American abolitionist, b. Newburyport, Mass. He supplemented his limited schooling with newspaper work and in 1829 went to Baltimore to aid Benjamin Lundy in publishing the  Genius of Universal Emancipation. This led (1830) to his imprisonment for seven weeks for libel. On Jan. 1, 1831, he published the first number of the  Liberator, a paper that he continued for 35 years (to Dec. 29, 1865), until after the Thirteenth Amendment had been adopted. In the  Liberator, Garrison took an uncompromising stand for immediate and complete abolition of slavery. Though its circulation was never over 3,000, the paper became famous for its startling and quotable language. Garrison relied wholly upon moral persuasion, believing in the use of neither force nor the ballot to gain his end. His language antagonized many. In 1835 he was physically attacked in Boston by a mob composed of seemingly respectable people, and thereby won a valuable convert to his cause in Wendell Phillips. Garrison opposed the work of the American Colonization Society in his  Thoughts on African Colonization (1832). He was active in organizing (1831) the New England Anti-Slavery Society and (1833) the American Anti-Slavery Society, of which he was president (1843–65). Garrison also crusaded for other reforms that he united with abolitionism, notably woman suffrage and prohibition. He went so far as to advocate Northern secession from the Union because the Constitution, which Garrison characterized as “a covenant with death and an agreement with Hell,” permitted slavery. He burned the Constitution publicly at an abolitionist meeting in Framingham, Mass., on July 4, 1854, and opposed the Civil War until Lincoln issued the Emancipation Proclamation. Garrison’s preeminence in the antislavery cause has been characterized as a “New England myth,” some arguing that while Garrison attracted attention, the effective fight against slavery was carried on by lesser known, more realistic men (see abolitionists). Garrison, a difficult personality, was not himself a good organizer.