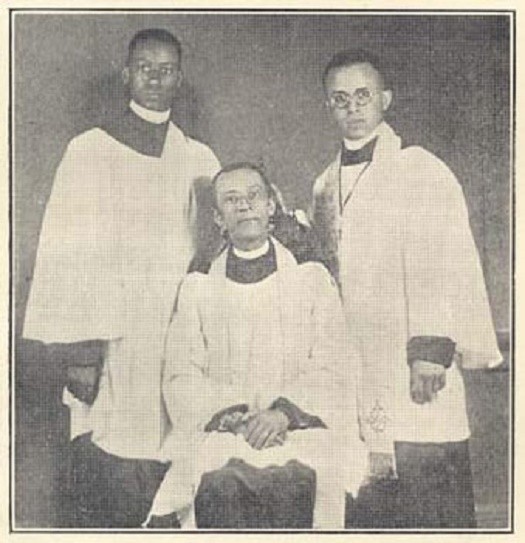 Bragg and his ministerial sons

George Freeman Bragg was an African-American priest, journalist, social activist, and historian. As the twelfth African American ordained as a priest in the Episcopal Church of the United States, Bragg worked tirelessly against racial discrimination and for interracial harmony.

Bragg was born into slavery in Warrenton, North Carolina, in 1863, during the American Civil War, and baptized at Emmanuel Episcopal Church. As the war ended, his carpenter father (also George Freeman Bragg) and seamstress mother (Mary) moved their family to Petersburg, Virginia to live with his grandmother Caroline Wiley Cain Bragg, a devout Episcopalian and former slave of an Episcopal priest.

As a child young Bragg delivered newspapers and established relationships with the city’s white leaders, including John Hampden Chamberlayne, editor of the Petersburg Index, and political ally of William Mahone, who had founded the Readjuster Party and appealed for the support of black voters.

Six months after Bragg began his theological studies, he was expelled for “insufficient humility”.  He then turned his attention to politics, working at Mahone’s headquarters. For his efforts, he was appointed a page in the House of Delegates in Richmond in 1881-82. On July 1, 1882, Bragg founded the weekly Petersburg Lancet, dedicated to civil rights issues. However, after the Readjuster Party losses in the 1883 elections, Bragg supported a black candidate for U.S. Congress, who lost to Mahone’s white candidate, James Dennis Brady. The campaign disillusioned Bragg, who decided Mahone did not care about the civil rights of black voters, only their votes. Thus on September 12, 1885, he announced that the Lancet would eschew politics, but concentrate on moral, educational and commercial matters. The following February, he changed the paper’s name to the Afro-American Churchman and later it became The Church Advocate. A change in the rector at St. Stephens also allowed Bragg to resume his theological studies at the Bishop Payne Divinity School, from which he graduated in 1886.

Bragg was ordained a deacon on January 12, 1887, and assigned as vicar to Holy Innocents Episcopal Church, a mission in Norfolk. He successfully challenged a rule that black deacons wait at least five years before ordination as priests.

In 1891, Bragg accepted a call and became rector of the oldest black Episcopal congregation in the South, Baltimore’s St. James Episcopal Church (founded 1824), where he served for 49 years, until his death. Under Bragg’s leadership, the struggling congregation of 63 again became self-supporting, tripling in size and building a new structure on Park Avenue and Preston Streets by 1901. By 1924, it was among the largest black Episcopal parishes in the country, with over 500 parishioners.