Bo Diddley, a singer and guitarist who invented his own name, his own guitars, his own beat and, with a handful of other musical pioneers, rock ’n’ roll itself, died in 2008 at his home in Archer, Fla. He was 79. The cause was heart failure, a spokeswoman, Susan Clary, said. Mr. Diddley had a heart attack last August, only months after suffering a stroke while touring in Iowa. 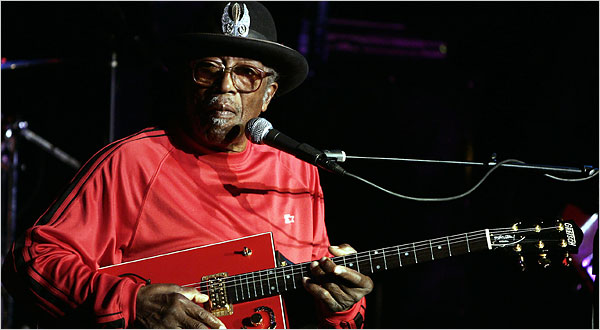 In the 1950s, as a founder of rock ’n’ roll, Mr. Diddley — along with Chuck Berry, Little Richard, Jerry Lee Lewis and a few others — helped to reshape the sound of popular music worldwide, building on the templates of blues, Southern gospel, R&B and postwar black American vernacular culture. His original style of rhythm and blues influenced generations of musicians. And his Bo Diddley syncopated beat — three strokes/rest/two strokes — became a stock rhythm of rock ’n’ roll.

« Previous PostIsrael Brooks, Jr: First African American to serve as a State Trooper for the South Carolina Highway Patrol Next Post »Poem: "Where You Are Planted" by Poet Evie Shockley