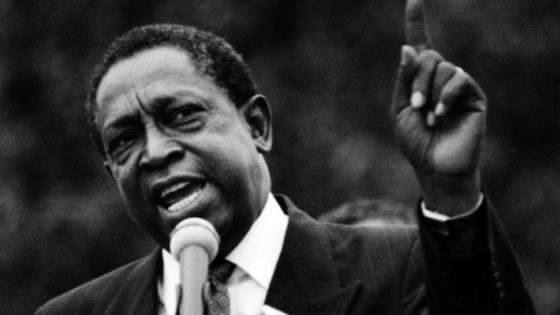 Clarence H. Du Burns was a self-made politician who rose through grass-roots involvement in his native East Baltimore to become the city’s first African-American mayor.

Burns never let the public forget his humble beginnings, growing up in a house at 424 N. Caroline St., his jobs hawking newspapers and vegetables, and getting hired as a locker room attendant at Dunbar High School the old-fashioned way – through City Hall connections. He got his nickname, Du, in the 1940s because he was always “doing things for people.” He secured much of this help for constituents through a political club he started in East Baltimore, which became the Eastside Democratic Organization.

Du Burns was first elected to the Baltimore City Council in 1971. In 1986, the then-Mayor William Donald Schaefer resigned after being elected Governor of Maryland. As City Council president, Burns was elevated to mayor in January 1987, becoming the first black mayor in the city’s history.

In the 1987 city elections, Burns ran for a full term but was defeated in the Democratic primary by Kurt Schmoke. He ran again in 1991 with the same result. Clarence H. Du Burns died in 2003.