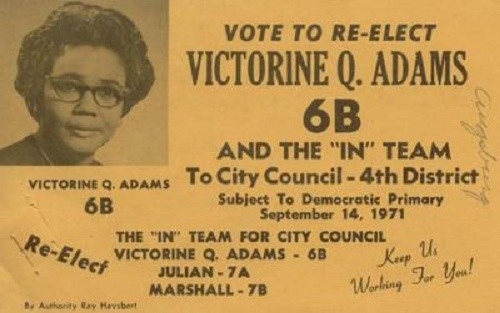 Victorine Quille Adams was the first African-American woman to serve on the Baltimore City Council.

In 1935, Adams met and married William L. “Little Willie” Adams, a local businessman who acquired his initial wealth through numbers games and eventually became a wealthy businessman and power broker. Adams turned her eye towards politics when she founded a women’s political club, the Colored Democratic Women’s Campaign Committee, in 1946. The initial purpose of the group was to “mobilize support for candidates — invariably white — who were sympathetic to black causes.”

In 1962, Adams ran unsuccessfully for a seat in the Maryland State Senate; she was successfully elected to the Maryland House of Delegates in 1966. The following year, Adams left the state legislature to run for a seat on the Baltimore City Council, representing the 4th District. In 1979, while serving on the City Council, Adams partnered with the Baltimore Gas and Electric Company to establish the Baltimore Fuel Fund, which is designed to help local families with their heating bills. The fund has since been renamed the Victorine Q. Adams Fuel Fund. Adams served four terms until her retirement in 1983. She remained active with the Women’s Campaign Committee until her death in 2006.