Edward Creston Gleed enlisted in the 9th Calvary in 1941. He went from being a “Buffalo Soldier” to a Tuskegee Airmen. He had also been assigned to the military intelligence.

Gleed graduated from Kansas University, and studied law at Howard University before entering Aviation Cadets in the U.S. Army. He graduated in 1942 as an officer and pilot. He served for three wars and put in thirty honorable and dedicated years to his country.

In the summer of 1944, he escorted heavy bombers to Budapest, where he and other pilots of the 332nd encountered Bf-109s. However, Gleed was credited with destroying at least two of them. He also assisted with the destruction of supply dumps, bridges, oil refineries, and aircrafts.

Gleed also served as a Squadron Commander of the 301st Fighter Squadron and as Operations Officer for the 332nd Fighter Group, and later for the 477th, in addition to his role in aerial combat.

When he retired in 1970, he was serving as System Program Manager and Chief Administrator/Contract Negotiator of government computer programming contracts for two major Air Defense Operational Control Systems. He also retired with over 6,000 flying hours.
After leaving the military life behind, Gleed enrolled at Southwestern University School of Law in Los Angeles and graduated in 1976 with a Juris Doctorate Degree, he was 60 years old at the time. Edward Creston Gleed died on January 25, 1990, he was 73. 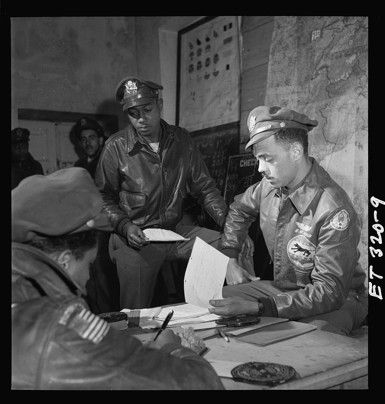