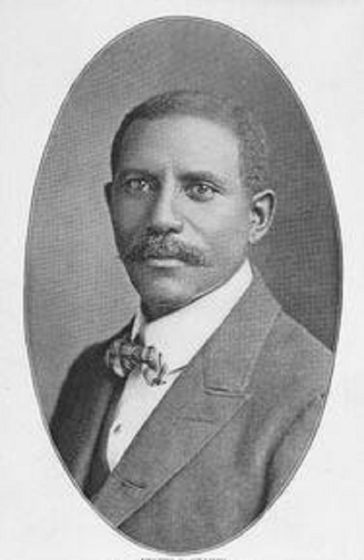 Junius Groves was born in slavery on April 12, 1859, in Louisville, Kentucky. At the age of 19, he moved to Kansas as an Exoduster.

He found work at the meat packing houses in Armourdale and later relocated to Edwardsville, where he purchased 80 acres of land and began to grow white potatos. His business prospered and he became known as the “Potato King of the World” because he reportedly grew more bushels of potatoes per acre than anyone else in the world. He also bought and shipped potatoes, seed potatoes, and other produce, as well as owning a store in Edwardsville and having numerous other business interests.

In addition to being the “Potato King of the World,” Groves was a founding member of the Kansas state Negro Business League. The Sunflower State Agricultural Association, and the Pleasant Hill Baptist Church Society. He was featured in Booker T. Washington’s book, The Negro in Business, (1907).
At the height of his success he owned more than 500 acres. Groves and his wife, Matilda, built a 20-room mansion, which featured the latest comforts of the day—electricity, hot and cold running water, and telephones.

In the early 1900s, he founded the community of Groves Center near Edwardsville, selling small tracts of land to African American families. He also built a golf course for African Americans, possibly the first such course in the county. Junius Groves died in Edwardsville in 1925.