Elmore James: Most Influential Slide Guitarist of the Postwar Period

Elmore James was, without question, the most influential slide guitarist of the postwar period. 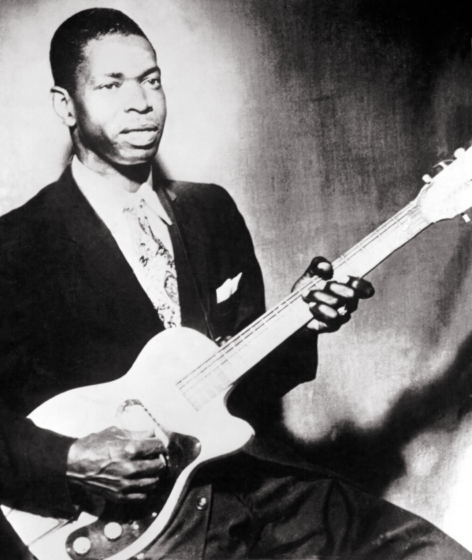 James was born on January 27, 1918, to Leola Brooks. He was later given the surname of his stepfather, Joe Willie James. He got his start with music learning to play bottleneck on a homemade instrument made out of a broom handle and a can of lard. By the age of 14, he had already mastered his playing skills and was working as a weekend musician.

He found work as a musician in juke joints and often went by the names “Cleanhead” or Joe Willie James. Although he stuck to a home base area around Belzoni, Mississippi, he would work with traveling players coming through, such as Robert Johnson, Howlin’ Wolf, and Sonny Boy Williamson. By the late 1930s, he had formed his first band, playing until the World War II broke out. He spent three years stationed with the Navy in Guam. After the army, he picked up his music career where he left off, as he moved to Memphis for a while and worked in clubs.

James is believed to be one of the most influential guitarists of his time. His slide style of guitar-playing influenced the likes of Hound Dog Taylor, Joe Carter, and J.B. Hutto, while his seldom-heard single-string work affected B.B. King and Chuck Berry. James was also one of the first “guest stars” on the popular King Biscuit Time radio show on KFFA in Helena, Arkansas, the Talaho Syrup show on Yazoo City’s WAZF, and the Hadacol show on KWEM in West Memphis.

Although, he was a legend in his time he was still unsure of his own ability and skills. He was secretly recorded by Trumpet Records at the end of a Sonny Boy session doing his signature tune, Dust My Broom. However, legend has it James did not stick around to hear the playback, and he definitely did not make an attempt to have a recording session.

In the meantime, he had moved to Chicago and assembled the nucleus of his great band the “Broomdusters” and recorded several certified blues classics. By this time, James had established a Reputation in the clubs of Chicago as one of the most popular live acts and regularly broadcasting over WPOA.

In 1957, he recorded several successful sides for the Chief label, all of which were later issued to the larger Vee-Jay records. James was a radio repairman by trade, so this helped when he needed to rework his guitar amplifiers, which he often did in his spare time. He aimed for them to produce raw, distorted sounds that did not resurface until the advent of heavy rock amplifications in the late 1960s.

James was always in poor health because of heart condition, which eventually sent him back to Jackson, Mississippi, where he set aside working as a disc jockey and repairman. He returned to Chicago, ready to resume his on-again, off-again playing career when he suffered his final heart attack on May 24, 1963. Over 400 blues luminaries attended his wake before his body was shipped back to Mississippi. He was elected to the Blues Foundation’s Hall of Fame in 1980 and was later elected to the Rock & Roll Hall of Fame.