Thurgood Marshall was the first African-American Justice of the U.S. Supreme Court, who was also instrumental in the ending of legal/judicial segregation in the U.S. Courts. Serving from October 1967 to 1991 October, Marshall entered the historical records as the first black Justice of the court, and the 96th Justice overall. He was a prominent and firm advocate for civil rights.

Born on 2nd July, 1908, in Baltimore, Maryland, Marshall attended the Howard University for his Bachelor’s Degree in Law. Thurgood earned a very memorable place in the U.S. history from a perspective of two key accomplishments or achievements. First, he became a legal counselor to the NAACP (National Association for the Advancements of Colored People) where he utilized his position at the judiciary to advocate for equality for the African-Americans. Marshall invested his legal knowledge and skills in the guidance of the litigation that put a stop to the legal underpinnings of the Jim Crow segregation. Thurgood Marshall, in 1954, won the “Board of Education V. Brown Case,” in which the Supreme Court ended the widespread racial segregation within the legal institutions and public schools. 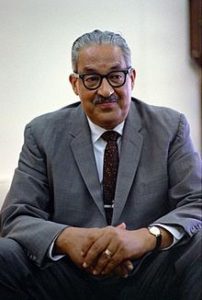 Between 1934 and 1962, serving as the NAACP Attorney, Thurgood traveled nationwide on her move to represent all sorts of clients with disputes involving the issues race and racial injustices. He dealt with trials from common/petty crimes to appellate advocacy, thereby raising the most critical concerns the constitutional law. His steadfast advocacy for civil rights and equality ultimately earned him a nickname “Mr. Civil Rights.” Marshall argued in about 32 court cases before the Supreme Court, succeeding in 29 of them. Some of the famous cases he prevailed in included the Allwright v. Smith of 1944, which invalidated the notion of “White Primary.” Another case was that of Kraemer v. Shelley of 1948, which the state courts from reinforcing the racially-restrictive real-estate covenants. Finally, Thurgood Marshall advocated and succeeded in the Brown v. Board of Education, which ruled and invalidated the state-enforced racial segregation among the public schools (this practice was found to be unconstitutional).

In his second achievement, serving as an Associate Justice of the Supreme Court, and the first African-American Justice, he crafted a distinguishing jurisprudence that was characterized by uncompromising liberalism. This created an unusual attentiveness to the practical considerations beyond the formalities of the law; hence, there was an identifiable willingness to the dissent. He served at the U.S. Court of Appeal for the 2ND Circuit upon his appointment by President J. F. Kennedy. He was later, in 1965, appointed as the Solicitor General by President Johnson Lyndon. In 1967, he was nominated by President Johnson to the U.S. Supreme Court, and later, in October, approved by the Senate.

Justice Thurgood Marshall was an outspoken civil rights advocate in the courts that were dominated by conservatives. Throughout his two and a half decades tenure, he voted to uphold the racial and gender affirmative practice policies in several cases and succeeded in them. Marshall died on 24th January, 1993 of heart failure, leaving a legacy of his firm advocacy for equality and civil rights in the American history.