Meet The First Black Attorney Certified To Argue Before The Virginia Supreme Court of Appeals.

Giles B. Jackson, although born enslaved, became an attorney, entrepreneur, real estate developer, newspaper publisher, and civil rights activist in the conservative mold of his mentor, Booker T. Washington. During the American Civil War (1861–1865), he served as a body servant to his master, a Confederate cavalry colonel. After the war, Jackson worked for the Stewart family in Richmond, where he learned to read and write. Subsequently, he was employed in the law offices of William H. Beveridge, who tutored Jackson in the law. 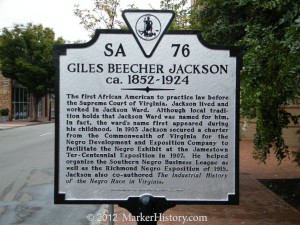 In 1887, Jackson became the first #African American attorney certified to argue before the Virginia Supreme Court of Appeals. The next year, he helped found a bank associated with the United Order of True Reformers, and in 1900 became an aide to Washington, who had just founded the National Negro Business League in Boston. Jackson organized and promoted the Jamestown Negro Exhibit at the Jamestown Ter-Centennial Exposition of 1907 in the face of criticism from some #black intellectuals that his attempt to highlight black achievement was itself an accommodation of Jim Crow segregation. He published a newspaper designed to publicize the exhibition and, in 1908, a book detailing its history. His efforts at the end of his life on behalf of a congressional bill aimed at addressing interracial labor problems failed. Jackson died in 1924.