The First African-American on the Pilot’s Cockpit: Bessie Coleman

Born on 26th January, 1892, in Atlanta, Texas, Bessie Coleman grew to become the first African-American and the first female Native American to be licensed as a pilot. In February 1921, civil aviator Bessie Coleman hit historical records as the first black woman to stage a public flight within the entire American continent and globally. 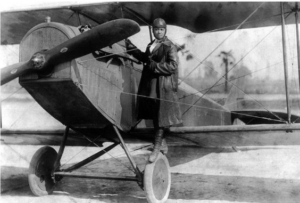 Bessie Coleman developed the interest in flying while still at her teenage age. However, no Civil Aviation school would allow her to practice what she was so passionate about. Neither African-American, women nor civilian Native Americans were allowed to pursue their career in flying in the United States. As such, Bessie struggled and invested all her efforts in learning French, and also made some personal savings so that she could raise the money to go and study piloting in France. She thereby attended one of the France’s best aviation schools, Caudron Brothers School of Aviation, where she earned her license as the first black female pilot, just in seven months.

After acquiring the much-anticipated skills from France, Bessie Coleman travelled back to the United States where she would struggle to attain the much-needed publicity that would make her attract the paying audiences. She made her first appearance at the Air Show on 3rd September, 1922 at Curtiss Air Field, New York, with a borrowed plane from Curtiss Glenn. She participated in several other shows in Chicago, Memphis, and Texas between 1923 and 1925. Bessie travelled to California in the search for money that would enable her acquire a plane of her own. Unfortunately, she managed to acquire one, which she crashed during a flight and returned to Chicago.

Two years later, Coleman succeeded in lining up for a series of exhibition flights and lectures in Texas, which earned her some money, sufficient for the down-payment on Jenny-JN4 with O-X5 Engine (an old plane). She then moved towards Southeastern U.S. where she performed a sequence of lectures at Black Theaters in Georgia and Florida. While at Orlando, she opened up a beauty shop to top up her fund accumulations, which would help her start up the much anticipated Aviation School. Coleman continued performing exhibition flights using borrowed aircrafts, and at some instances performed parachute jumping.

Bessie focus, determination, and hard work finally rewarded her. She specialized in stunt flights, parachuting, barnstorming, and aerial tricks’ performance, which she spent her entire life performing until her accidental death. Coleman died in a plane crash accident when she was testing her new aircraft on 30th April, 1926. The plane malfunctioned and lost control, killing Coleman and her mechanical expert. She remains in historical records as a female pioneer in the field of civil aviation.

« Previous PostAlabama’s Black Sharecroppers: A History of Resistance in the 1930s Next Post »Beyond the Painful Chains of Slavery: Phillis Wheatley, the First Published Female African-American Poet