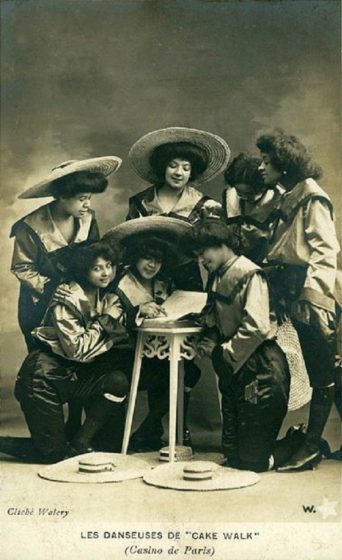 The Florida Creole Girls were well-known performers who frequented the Casino de Paris after the turn of the 20th century. The young ladies were performed as part of an American dance troupe and helped introduce the Cake Walk Dance throughout Europe. Miss Shippert who is standing in the center of the photo was the founder of the group.

In 1986, the Cake Walk was first publicized at the Philadelphia Centennial. It featured blacks who would sing plantation songs and perform a dance which at the time was called the ‘Chalk-line walk.’

The dance originated on the plantations when slaves would dance for their owners. Plantation owners served as judges for these contests — and the slave owners didn’t know it but the slaves were actually mocking them during these highly elaborate dances.

Eventually, the dances found their way into minstrel shows. The ‘Grand Cakewalk was held at Madison Square Garden in 1897, the largest venue in New York City.