0 Posted by Jae Jones - June 13, 2022 - Black First, Black History, BLACK MEN
Frederick D. Gregory was the first black to command a Shuttle Mission, he flew more than 40 different types of single-and multi-engine fixed and rotary wing military and civilian aircraft gliders.
Gregory was born on January 7, 1941, in Washington, D.C. His father was Francis A. Gregory, an educator who was assistant superintendent for DC Public Schools as well as the first black president of the DC Public Library Board of Trustees. His father has a public library named after him in the Ward 7 Hillcrest neighborhood of Washington, DC. His mother was Nora Drew Gregory, a lifelong educator as well as public library advocate. She was also the sister of noted African-American physician, surgeon and researcher Dr. Charles Drew.
Frederick D. Gregory received a Bachelor’s degree from the USAF Academy in 1964 and a Master’s Degree in Information Systems from George Washington University in 1977. Gregory flew helicopters for three years including a tour in Vietnam as a rescue crew commander. After completing the U.S. Navy Pilot School, he was a research/engineering test pilot for the Air Force at Wright-Patterson Air Force Base, Ohio and for NASA at the Langley Research Center, Virginia.
He was the first black person to command a Shuttle Mission, and had flown more than 40 different types of single-and-multi-engine fixed and rotary wing military and civilian aircraft gliders. Gregory served at NASA Headquarters as Associate Administrator for the Office of Safety and Mission Assurance (1992-2001), Associate Administrator for the Office of Space Flight (2001-2002), and NASA Deputy Administrator (2002-2005). Gregory resigned from NASA in October 2005.
After he left the Astronaut Office, he assumed the roles of Associate Administrator for Safety and Mission Assurance and as the Associate Administrator for Space Flight before becoming the NASA Deputy Administrator. 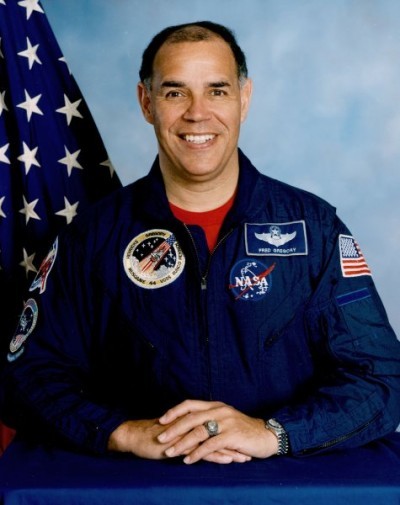