Gone But Not Forgotten: Happy Birthday To The First Black Female Pilot! 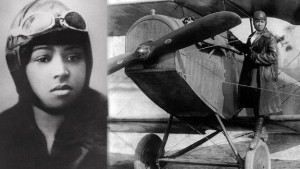 In 1922, a time of both gender and racial discrimination, Coleman broke barriers and became the world’s first black woman to earn a pilot’s license. Because flying schools in the United States denied her entry, she took it upon herself to learn French and move to France to achieve her goal. After only seven months, Coleman earned her license from France’s well known Caudron Brother’s School of Aviation.

Though she wanted to start a flying school for African Americans when she returned to the U.S., Coleman specialized in stunt flying and parachuting, and earned a living barnstorming and performing aerial tricks. In 1922, hers was the first public flight by an African- American woman in America.

Tragically, on April 30, 1926, Coleman was killed in an accident during a rehearsal for an aerial show which sent her plummeting to her death. She was only 34 years old.Coleman remains a pioneer of women in the field of aviation.