Reginald A. Gammon: Intellectual Artist of the Civil Rights Struggles of the 1960s 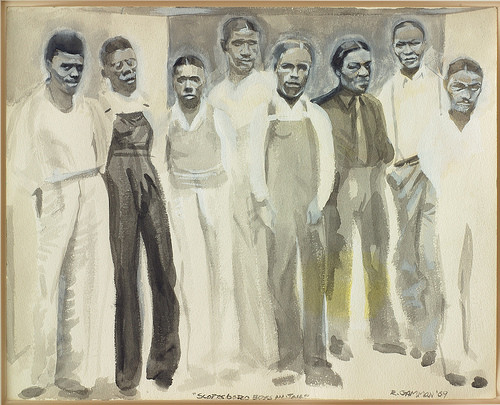 Reginald A. Gammon was an intellectual artist, his work depicted the civil rights struggles of the 1960’s, the dignity of unsung heroes, jazz and blues musicians and observations of everyday life.

He joined the Navy and served from 1944-46 with an all black unit stationed in Guam. After the war, he returned to Philadelphia. He was  offered a five-year scholarship at Tyler School of Fine Arts, he turned it down so he could help support his family. In 1948, after two years of working and going to school, he left Philadelphia and moved to New York City. To support himself, Gammon took jobs that ranged from sorting mail for the US Post Office, to painting lampshades, to designing advertisement copy for Liften, Gold and Asher.

Gammon was a founding member of Spiral, an artist collective that joined in 1963 to discuss the contributions African American visual artists could make to the civil rights movement. Freedom Now was Gammon’s contribution to Spiral sole group exhibition, “Black and White” in 1965. Four shades of color was used to paint the figures, creating racial ambiguity. His work was a part of the 1965 Black and White Exhibition where participating artists did not want their art to be defined by their race, but they wanted it to be used to  identify with the struggles faced by African Americans at that time.

PainterReginald A. GammonReginald Gammon
« Previous PostThis Is The First African American To Earn A PhD In The United States.  Next Post »Famed Composer and Violinist-Jose Silvestre White