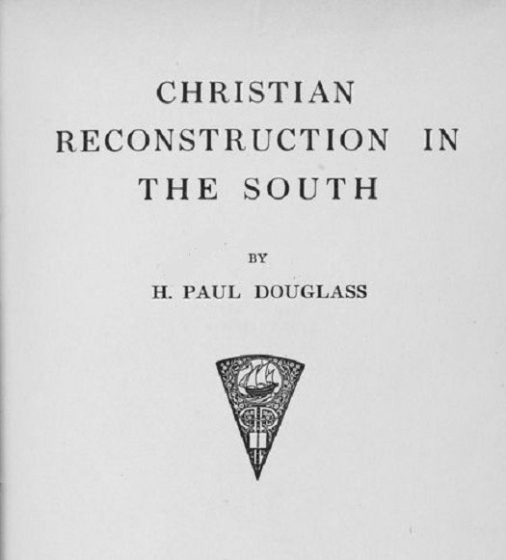 Harlan Paul Douglass was born in Osage, Iowa on January 4, 1871, to Truman Orville and Maria Greene Douglass, and had three brothers and two sisters.

Douglass often traveled between the Midwest and the Northeast, taking courses at (Harvard University, Columbia University), and teaching courses at Drury College, he also spent time pastoring at churches in Manson, IA and Springfield, MO.

Several of his manuscripts deal with race relations, and in a letter to his mother, and Douglass’ wife, he described how upset he had been in accidentally witnessing a lynching. Douglass’ position on race seems to have been a contributing factor to his departure from his last pastorate in Missouri, which two years later was the scene of intense white-dominated racial violence.

From 1906–10 Douglass served as the Superintendent of Education for the American Missionary Association (AMA) and Corresponding Secretary until 1918. Although it is unknown why Douglass made the shift from pastor to mission administrator, his choice of the AMA makes sense in light of his position on race. The AMA was established in 1846 by a group of abolitionists who had founded schools for African Americans and other minorities (including Appalachian whites) during the US Civil War.

Following World War I, Douglass worked for a year in France with the Army Educational Corps for the education and demobilization of black troops. His proposed program to combine military work, agricultural training, and education (literacy) was rejected.

His career as a sociologist officially began in 1921 at age 50 when he joined the staff of the Institute of Social and Religious Research (“the Institute”) as Research Director shortly after it was organized. During its 13-year span, the Institute produced 48 research projects and published 78 books. Douglass personally authored 12 books during this time, 11 of which were based on Institute studies.