Known for being able to cry at the drop of a hat, Actress Helen Dorothy Martin had an extensive career in entertainment. Martin made appearances as both a stage and television actress. She is best known for her roles as Wanda on the CBS sitcom “Good Times,” in which she attended every funeral and gave a tearful reaction to all bad news. Martin also appeared on NBC sitcom, “227” as Pearl Shay, a loving grandmother, but nosey neighbor who knew everyone’s business and listened to private conversations at her front window.

Martin was born in St. Louis, Missouri. She grew up attending public schools which were segregated during that time. She attended Fisk University for two years.

Martin moved to New York after school to pursue a career in acting, and trained at the W.P.A. Theater and with the Rose McClendon Players. While in New York, she worked on Broadway for several years as a character actress, debuting with Orson Welles in “Native Son,” Ossie Davis’ in “Purlie Victorious,” and several others. Martin became widely known later in life due to her roles in the popular television shows. Martin also portrayed a grandmotherly figure in several films, such as “Hollywood Shuffle,” “Don’t Be a Menace to South Central While Drinking Your Juice in the Hood,” “I Got the Hook Up,” and “Bulworth.”

Helen Martin died of a heart attack on March 25, 2000, in Monterey, California. 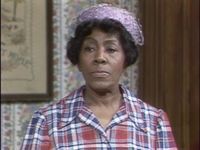