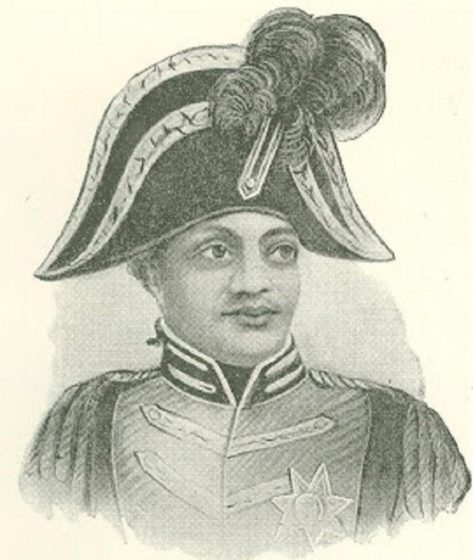 Henri Christophe was a West African slave and became an early king of (Haiti).

Christophe was born on the island of Grenada, a British colonial acquisition. His parents were slaves brought to Grenada with thousands of other West Africans to work in the sugar industry. These slaves in the sugar industry were known for their fierce and determined nature to resist the institution of slavery.

Henri was sold by the ship’s captain to a French sugar planter in the French province on the island of Saint Dominique called Haiti, which was a Carob Indian name meaning “the land of the mountains.” The brutality of the French planters led to much discontent among the slaves in Haiti. These acts of brutality were witnessed by Christophe and set the stage for his role in the Haitian revolution. He participated in the American Revolutionary War in the French contingent. As a sergeant, he was among the 545 Haitian free Negroes known as the Fontages Legion.

In June 1794, the Spaniards and the English who wanted to share the wealth created by the sugar industry threatened Haiti. The Spaniards constituted the greatest threat and a battle for control of Haiti ensued. The three principal figures in the Haitian revolution were Toussaint L’Overture, Jean Jacques Dessalines, and Christophe. Toussaint joined the French forces against the Spaniards, became a general of the slaves, and marched to several villages, liberating his brothers who immediately joined his forces. After distinguishing himself in battle, Christophe was made a sergeant by Toussaint and later made a general by Dessalines.

The French forces were defeated and Haiti was declared an independent republic on November 27, 1803. The Republic of Haiti was divided into two states, and Christophe was elected president of the Northern State in February of 1807. As president Christophe set out to improve all aspects of life in the Northern Province. One of his major concerns and preoccupations was the defense of his country from internal and external aggression.

Christophe suffered a stroke that left him partially paralyzed in August 1820. The news quickly spread about his ailment and the seeds of rebellion began to grow. On October 2, 1820, the military garrison at St. Marc led a mutiny that sparked a revolt. The mutiny coincided with a conspiracy of Christophe’s own generals. Some of his trusted aides took him to the Citadel to await the inevitable confrontation with the rebels. Christophe ordered his attendants to bathe him, dress him in his formal military uniform, place him in his favorite chair in his den, and leave him alone.

Shortly after the attendants left his side, Christophe committed suicide by shooting himself in the heart with a silver bullet on October 8, 1820.