How Henry ‘Box’ Brown Shipped Himself 350 Miles To Freedom

In 1849, Virginia slave Henry Brown (1815-???) escaped to freedom in such a way that he became an immutable subject of Underground Railroad lore. Brown was a skilled slave; however, he became virulently dissatisfied with slavery when his family was sold. Brown befriended Samuel Smith, a merchant, who observed that Brown’s skill with tobacco could sustain him as a free man. Brown made up his mind to escape, and with assistance from a sympathetic free black, constructed a box 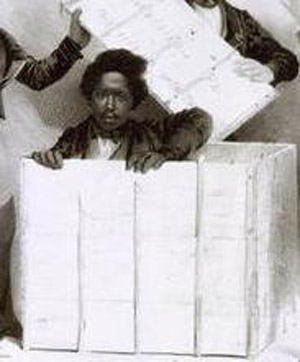 with dimensions 3 feet by 2 feet by 2 feet. Brown secretly contacted the Philadelphia Anti-Slavery office, and enigmatically alluded to the pending arrival of a box that should be immediately opened. Brown then shipped himself, in the box, to the office. He arrived alive, and now, free, having endured a trek of 350 miles with 3 air holes and minimal provisions. His creative escape earned him the name, Henry “Box” Brown. J. Miller McKim and William Still of the Anti-Slavery Office were among those present at Brown’s “resurrection.”