Nick Gabaldon inspired a generation of surfers from diverse backgrounds to ride the waves of the open ocean. Gabaldon was African-American and Mexican descent; his mother was Black and his father was Latino. Los Angeles later documented Gabaldon as the first surfer of the particular race. Gabaldon was a former WWII Navy vet, he worked as a lifeguard after the military. He didn’t have a car, so he surfed to many of his destinations.

Gabaldon constantly challenged the racial hierarchies of the city, especially when he surfed and just wanted to hang out and enjoy the beach. There were places that African Americans and people of mixed-races were just not welcomed. Plenty of people didn’t mind reminded those who were not welcomed of the fact as well.

However, there was only one place that Gabaldon felt free to surf and was really only allowed to surf was Santa Monica’s beach spot at Bay Street, “Inkwell.” Inkwell during the time was the only place where African Americans were free to spend time on the beach enjoying themselves without the racism. Black people could hang out and surf as they pleased. The beach was also referred to as the “Negro Beach”, and several other derogatory names. 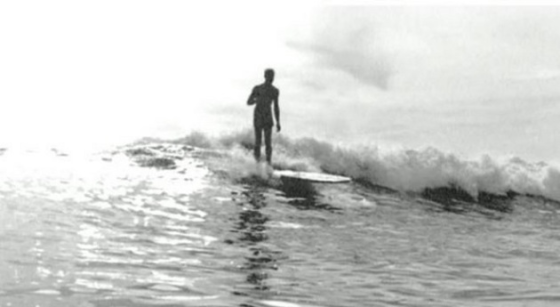 While a student at Santa Monica College, Nick Gabaldon perished in a surfing accident at the Malibu Pier in 1951. He crashed into the Malibu Pier while attempting a surfing move known as a “pier ride” or “shooting the pier.”  At that time, there was a south swell that came on, creating some big and high waves in that area. Nick’s surfboard was found immediately, but it was 3 or 4 days before his body was found; it washed up on Las Flores Beach, further east of the Pier. The coroner ruled that he died as a result of drowning; he was on 24-years-old.

Gabaldon was referenced in the well-known novel “Gidget” in 1957. His legacy is memorialized on a plaque at the 200 sq ft beach stretch that was formerly known as the Inkwell in Santa Monica, CA.