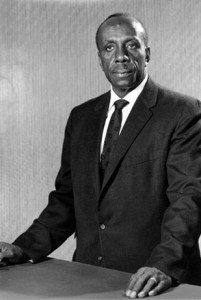 Dr. Howard Thurman was an author, civil right leader, educator, and philosopher. It is believed he also was the driving force behind Dr. Martin Luther King Jr.

Thurman was born in Florida in 1899, a time when the state was very much segregated. He was raised by his grandmother who at one time was enslaved. Thurman attended Morehouse and graduated valedictorian in 1923. He later pursued studies in theology and graduated from Colgate-Rochester Theological Seminary in 1926.

His first pastorate began at Mount Zion Baptist Church in Oberlin, Ohio. At Oberlin, he encountered the work of Rufus Jones, a Quaker mystic, and leader of the pacifist Interracial Fellowship of Reconciliation. Thurman eventually studied with Jones and described this time as the watershed event of his life.

He received the prestigious joint appointment as Professor of Religion and Director of Religious Life at Morehouse and Spelman colleges in Atlanta, Georgia, and later pursued a Doctorate in Philosophy, and became the first black Dean at Boston University and then the first Dean of Rankin Chapel at Howard University in the District of Columbia.

“Peace Tactics and a Racial Minority,” an essay which was written by Thurman, depicted white America as characterized by the “will to dominate and control the Negro minority,” a situation which engendered among blacks a spiritually crippling hatred of their would-be dominators. He suggested that a “technique of relaxation,” might break this cycle.

Years later, Thurman led the “Negro Delegation of Friendship” to South Asia in 1936, where he met with Mohandas Gandhi. During the meeting, the message of non-violence being made worldwide by Blacks was discussed. Gandhi challenged Thurman to rethink the idea of Christianity as a religion used by whites to keep blacks “in their place” with images of a white Christ and ideas of a land of milk and honey in the great beyond. Gandhi also believed that someday a black man would succeed in making the message mandated around the world.

In 1953, he became the dean of Marsh Chapel, the first black dean at a majority white American university, mentoring, among many others, Martin Luther King, Jr.

Thurman married Katie Kelley on June 11, 1926, less than a month after graduating from seminary. Katie was a 1918 graduate of the Teacher’s Course at Spelman Seminary (renamed Spelman College in 1924). Their daughter Olive was born in October 1927. Katie died in December 1930 of tuberculosis. Howard Thurman died on April 10, 1981.

Who Was Howard Thurman?