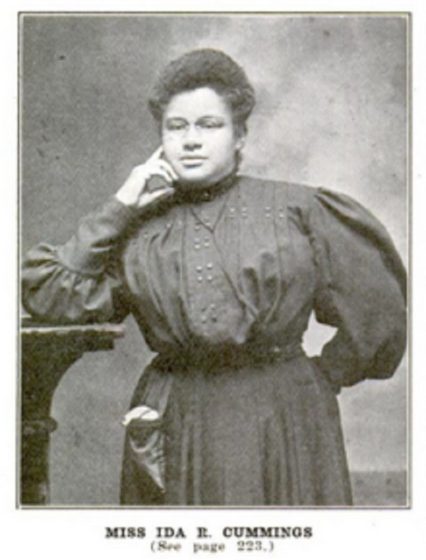 Ida Rebecca Cummings was an educator, clubwoman, and organizational leader.

Cummings was born on March 17, 1867, to Henry and Eliza Jane Davage Cummings. Her father was a chef, and her mother ran a boarding house. She spent her childhood growing up in Baltimore, Md with her siblings.

Cummings graduated from Morgan College and attended the Columbia University Summer School for teachers in 1922. Later she would serve as the first female trustee at Morgan College.

Cummings served as the first black kindergarten teacher in Baltimore, MD. She was a teacher in the segregated schools of Baltimore County, Maryland, first at Sparrow’s Point, and later in the city. Affectionately called “Miss Ida” by her students, Cummings taught for thirty-seven years. While teaching, she participated in organizations that worked to improve housing, health care, and education for poor children. In 1902, she was elected to serve on the executive committee of the Colored Teachers’ Association of Maryland.

She was elected corresponding secretary of the National Association of Colored Women’s Clubs in 1912 and was elected vice president in 1916. Cummings also served as an officer of the first Farmers’ Wives and Rural Women’s Conference, which met in Baltimore in 1917.
Cummings wrote an essay that was included in Methodism and the Negro (1910).

Ida Rebecca Cummings
« Previous PostCheyney University, One of the Nation's Oldest HBCUs, Was Founded Today in 1837 Next Post »This Man Was The First Black President Of Morehouse College