James Reese Europe was a ragtime and early jazz bandleader, arranger, and composer. He was the leading figure on the music scene in New York City in the 1910s. Europe was dubbed as the “Martin Luther King, Jr. of Music.” 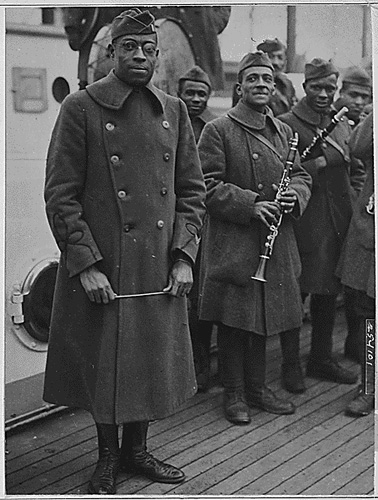 In 1910, he organized the Clef Club, a society for Black people in the music industry. The club made history in 1912 when it played a concert at Carnegie Hall for the benefit of the Colored Music Settlement School. The Clef Club Orchestra, while not a jazz band, was the first band to play proto-jazz at Carnegie Hall.

Europe was known for his outspoken personality and unwillingness to bend to musical conventions, particularly in his insistence on playing his own style of music. He was once quoted as saying:

“We have developed a kind of symphony music that, no matter what else you think, is different and distinctive, and that lends itself to the playing of the peculiar compositions of our race … My success had come … from a realization of the advantages of sticking to the music of my own people.”

And later, “We colored people have our own music that is part of us. It’s the product of our souls; it’s been created by the sufferings and miseries of our race.”

During World War I, Europe obtained a commission in the New York Army National Guard, where he saw combat as a lieutenant with the 369th Infantry Regiment, also known as the “Harlem Hellfighters.” He went on to direct the regimental band.

Europe’s “Hellfighters” also made their first recordings in France for the Pathé brothers. The first concert included a French march and the Stars and Stripes Forever, as well as syncopated numbers such as “The Memphis Blues.”

Europe died from injuries he sustained from one of his drummers in his band. The drummer stabbed him in the neck with a pen knife after claiming Europe did not treat him well. At the time of his death, he was the best-known African-American bandleader in the United States.