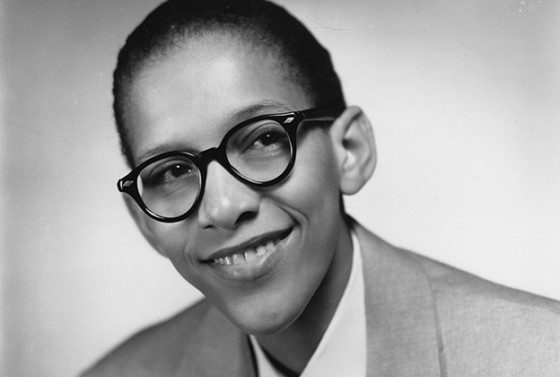 Jimmy Scott is remembered as the man with the “unique voice.” His unique voice was due to it being undeveloped from Kallmann’s Syndrome, a hereditary hormonal deficiency that stunted his growth. Scott never went through puberty, as a result of the deficiency. He was left with a high pitched sounding voice, which is where he gained his nickname “Little” Jimmy Scott.

Jimmy Scott was born on July 17, 1925 in Cleveland, Ohio, he was one of ten children. His mother died when he was just 13 in an automobile accident, and the children were put in foster care.

As a young boy, Scott became interested in jazz and vaudeville shows. These were his primary sources of entertainment; he also listened to Paul Robeson spirituals on the radio.  Scott first went on the road in Caldonia’s Revue in 1943. Estelle “Caldonia” Young was like a mother to young Scott. He credits his lyrical approach to Billie Holiday’s influence. The deep spiritual quality of Scott’s style draws on his mother’s singing spirituals in church. Scott feels that spirituals demand such meaningful expression, and shouldn’t be performed merely for dramatic effect.

Scott’s first big break came in 1949, when Lionel Hampton hired him and billed him as “Little Jimmy Scott.” “Everybody’s Somebody’s Fool,” recorded at Scott’s second session with Hampton, gave the singer his first and only chart hit. He toured with Lou Reed and sang on the track, Sycamore Trees, for the series finale of Twin Peaks.

Good fortune for him soon took a tragic turn, when Scott and Ray Charles “got mixed up in a confrontation” with Scott’s previous record company. Through cruel legal tactics, Scott’s former label prohibited Charles from selling his new record. The company obstructed Scott’s career for over 20 years. Thus he spent long periods away from the microphone, working as a hotel shipping clerk and as a caretaker for his ailing father.

In the late 1980s, Scott returned to the New York nightclub scene, and his career took off. Jimmy Scott’s career spanned for nearly 60 years, and in that time he performed with a list of artists including Charlie Parker, Sarah Vaughan, Lester Young, Lionel Hampton, Charles Mingus, Fats Navarro, Bud Powell, and Ray Charles. Scott received the 2007 National Endowment Jazz Master Award. Jimmy Scott died in 2014 from cardiac arrest, he was 88.