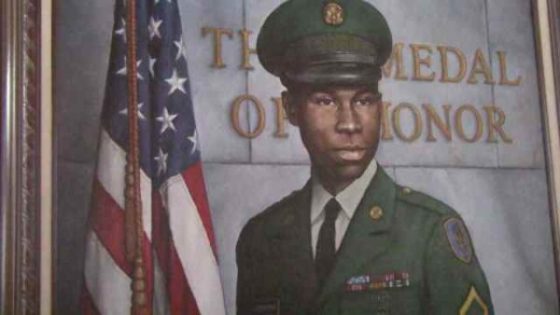 Garfield McConell Langhorn received America’s highest military decoration for his actions while serving in the army during the Vietnam War.

Langhorn was born on September 10, 1948, in Cumberland, Virginia. He graduated from Riverhead High School, Class of 1967.  At the age of 20, Langhorn joined the United States Army and began serving as private first class in Troop C, 7th Squadron, 17th Cavalry Regiment, 1st Aviation Brigade during the Vietnam War. On January 15, 1969, Langhorn’s actions earned him the Medal of Honor, America’s highest military decoration.

“Pfc. Langhorn’s platoon was inserted into a landing zone to rescue 2 pilots of a Cobra helicopter shot down by enemy fire on a heavily timbered slope. He provided radio coordination with the command and control aircraft overhead while the troops hacked their way through dense undergrowth to the wreckage where both aviators were found dead. As the men were taking the bodies to a pickup site, they suddenly came under intense fire from North Vietnamese soldiers in camouflaged bunkers to the front and right flank, and within minutes they were surrounded.

Pfc. Langhorn immediately radioed for help from orbiting gunships, which began to place minigun and rocket fire on the aggressors. He then lay between the platoon leader and another man, operating the radio and providing covering fire for the wounded who had moved to the center of the small perimeter. Darkness soon fell, making it impossible for the gunships to give accurate support, and the aggressors began to probe the perimeter. An enemy grenade landed in front of Pfc.
Langhorn and a few feet from personnel who had become casualties. Choosing to protect these wounded, he unhesitatingly threw himself on the grenade, scooped it beneath his body and absorbed the blast. By sacrificing himself, he saved the lives of his comrades.” The medal was presented to his mother on April 7, 1970, by President Richard M. Nixon.

Garfield McConell Langhorn
« Previous PostGertrude Saunders: Took a Beating from Bessie Smith for Affair with Husband Next Post »List of African-Americans Who Received the Medal of Honor