This day, June 17, we join hands to help Venus Williams celebrate her 38th birthday as she turns a year older. Venus rose from a tough childhood in Compton, Los Angeles, to become a champion women’s tennis player and four-time Olympic gold medalist. Born in Lynwood, California, Venus Williams learned to play tennis on the public courts of Los Angeles. Upon going professional in her sports career in 1994, she won seven Grand Slam titles and an Olympic gold medal in singles play. She also teamed up with her Sister, Serena to win several doubles championships, boosting her victory to a notch higher, even after being diagnosed with an autoimmune disease in 2011. 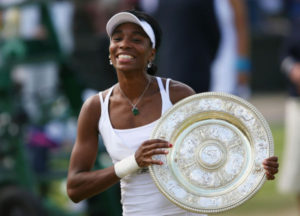 Venus Starr Ebony Williams is an American professional tennis player who is generally recognized as one of the world’s all-time greats in women’s tennis. Along with her younger sister Serena Williams, they are attributed for ushering in a new era of power and athleticism on the women’s professional tennis tour. As of January 28, 2017, Venus was ranked World No. 11 in singles, and has been ranked the World’s No. 1 by the Women’s Tennis Association on three occasions, for a total of 11 weeks. Venus Williams first became the World’s No. 1 on  February 25, 2002, the first African-American woman to do so in the Open Era. On 10th June, 2002, Venus and Serena became the first sisters to hold the No. 1 and No. 2 spots in the singles rankings, respectively.

On June 7, 2010, Venus became co-No. 1 in doubles with Serena after they won their 4th consecutive grand slam doubles title at Roland Garros. By virtue of that doubles ascension, Venus became one of seven women to reach No. 1 in singles and No. 1 in doubles. On June 21, 2010, Venus and Serena again occupied the No. 2 and No. 1 spots in the singles rankings, respectively. At the time, Venus had just celebrated her 30th birthday while Serena was three months shy from her 29th birthday. These were ages at which many of their peers had retired.

Williams has won four Olympic Gold Medals, one in singles and three in women’s doubles, along with a silver medal in mixed doubles. She and her sister Serena have won more Olympic gold medals than any other tennis player, male or female. Venus also holds the record for the most Olympic medals won by any tennis player worldwide, shared with Kathleen McKane Godfree. She is the only tennis player to have won a medal at four separate Olympic Games. At the 2000 Sydney Olympics, Williams became only the second player to win Olympic gold medals in both singles and doubles at the same Olympic Games, after Helen Wills Moody of 1924. By winning her 49th career singles title at the 2016 Taiwan Open, Venus became the 5th oldest WTA Tour titlist in the Open Era, at 35 years, 7 months and 28 days.

Williams has played against her sister in 27 professional matches since 1998, and won 11. They have played against each other in nine Grand Slam singles finals, with Venus holding a 2-7 record. Venus has 8 runner-up finishes in grand slam singles events with Martina Hingis being the only player other than Serena to beat Venus in a major final at the 1997 U.S. Open. Beginning with the 2002 French Open, they opposed each other in four consecutive Grand Slam singles finals; the first time sisters had so met in the Open Era. On the other side, the pair has won 14 Grand Slam doubles titles playing alongside each other and are undefeated in Grand Slam finals.

Read more of the stories about Williams via: