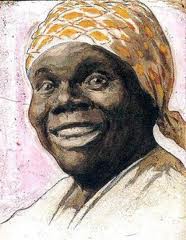 Nancy Green was born on Novermber 17, 1834. She was a Black storyteller and one of the first black corporate models in the United States.

The world knew her as “Aunt Jemima,” but her given name was Nancy Green. The famous Aunt Jemima recipe was not her recipe but she became the advertising world’s first living trademark.

Miss Green was born a slave in Montgomery County, Kentucky. Chris Rutt, a newspaperman, and Charles Underwood bought the Pearl Milling Company and had the original idea of developing and packaging a ready-mixed, self-rising pancake flour. To survive in a highly competitive business, the men needed an image for their product.

In 1889, Rutt attended a vaudeville show where he heard a catchy tune called “Aunt Jemima” sung by a blackface performer who was wearing an apron and bandanna headband. He decided to call their pancake flour “Aunt Jemima.”

Rutt and Underwood were broke, so in 1890, they sold the formula to the R.T. Davis Milling Company. Mr. Davis began looking for a Black woman to employ as a living trademark for his product, and he found Nancy Green in Chicago. She was 56 years old. The Aunt Jemima Pancake Mix was introduced in St. Joseph, MO.

In 1893, the Davis Milling Company aggressively began an all-out promotion of “Aunt Jemima” at the World’s Columbian Exposition in Chicago. Green, as “Aunt Jemima,” demonstrated the pancake mix and served thousands of pancakes. Green was a hit, friendly, a good storyteller, and a good cook. Her warm and appealing personality made her the ideal “Aunt Jemima,” a living trademark. Her exhibition booth drew so many people that special policemen were assigned to keep the crowds moving. The Davis Milling Company received over 50,000 orders, and Fair officials awarded Nancy Green a medal and certificate for her showmanship.

She was proclaimed “Pancake Queen.” She was signed to a lifetime contract and traveled on promotional tours all over the country. Flour sales were up all year and pancakes were no longer considered exclusively for breakfast.

Nancy Green maintained this job until a car crash in Chicago killed her on September 23, 1923. The Davis Company also ran into money problems, and the Quaker Oats Company purchased the Aunt Jemima Mills in 1925.