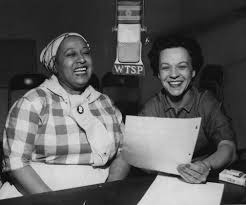 Aylene Lewis portrayed Aunt Jemima at the eponymous restaurant at Disneyland, which opened in 1955. Because it was such a popular eating place at the park, it was refurbished in June 1962. In the eight years prior to the remodeling the restaurant had served pancakes to 1.6 million guests (Marquette, 1967, p. 137). Lewis became well known for serving pancakes to dignitaries.

Clad in her bandanna and matching skirt and shawl, she posed for pictures with many visitors to Disneyland. She received souvenir pictures and letters “from all over the world, in all languages and from all races and creeds” (p. 157). Indian Prime Minister Nehru’s normal calm turned to animation as he posed with Lewis’s hand clasped in his. Quite a celebrity herself, she was also at ease in front of television cameras. She also developed a close relationship with Walt Disney. Lewis died in 1964, after posing as the Disneyland Aunt Jemima from 1957 to 1964.