Looking Black On Today In 1920, The First Black Baseball League Was Established. Here’s How 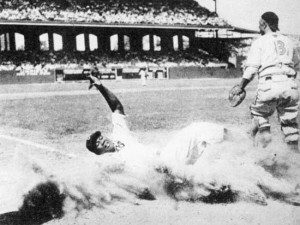 Shortly after the Civil War ended, the first public baseball game between all-black teams was played. The Brooklyn Uniques played the Philadelphia Excelsiors, but lost on their home turf, 37-24. Over the next 20 years, more than 200 black teams would be formed around the country.

While some blacks were able to play on traditionally white teams — especially in the more tolerant North and Midwest – Jim Crow laws and racism prevented them from making significant inroads. All opportunities were lost in 1890 when the National Association of Base Ball(sic) Players rejected blacks from play. The so-called “gentleman’s agreement” to bar black teams from the organized leagues for the next 50 years was done to prevent “some division of feeling, whereas, by excluding them no injury could result to anyone.”

Undeterred, the South, Midwest and North all saw new black teams in play. They traveled the country, playing other all-black teams and often challenging all-white teams to exhibition games. In 1888, the Cuban Giants defeated the all-white New Yorks four games out of five.

The dawn of the twentieth century brought new growth to black teams across the country. With the Great Migration, many blacks moved from the South to the more industrialized areas in the North. Urban centers saw the rise of teams such as the Philadelphia Giants, the Indianapolis ABCs, the Bacharach Giants of Atlantic City and the Chicago American Giants. Within their ranks were many notable athletes, including “Pop” Lloyd.

“Rube” Foster, the owner of the Chicago American Giants, knew the time was right for a league of their own, and brought together the heads of other Midwestern black teams. Together in 1920 they created the first black league: The Negro National League. Later that year, the South saw the birth of the Negro Southern League. The Eastern Colored League was started in 1923 and by the next year, the National and Eastern leagues faced off in their own World Series. (The Kansas City Monarchs won, beating the Philadelphia Hilldales.) 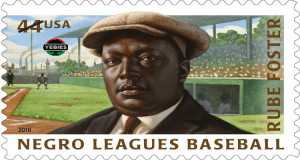 The leagues brought more than great entertainment to the communities in which they played — they also were economically successful over the years. Although the Negro National League was forced to dissolve during the Great Depression, a new National League quickly replaced it. Overall, during the flush years of the early twenties and early forties, the leagues were economic all-stars, with the knock-on effect of helping nearby black businesses such as hotels and restaurants.

1946 saw the beginning of the end of the Negro Leagues, when Jackie Robinson was signed by owner/manager Branch Rickey to be the first black player for the Brooklyn Dodgers. Black baseball fans followed their favorite players to the Major Leagues and slowly the Negro League teams disbanded. The last four teams remaining finally broke up the League in 1960.