White Supremacy and the Democratic Party’s Dark Past

“Wilmington on Fire” is a stunning movie about the racist massacre that took place in Wilmington, North Carolina when in 1898 a mob of whites burned down Black businesses in downtown Wilmington and either killed or exiled its Black citizens, threatening death to some of the Black property owners if they even thought about returning.

With a passionate cast of interviewees (including actual descendants of victims of the atrocity) Wolly McNair’s intermittent arresting visual reproductions of some of the events, a stellar soundtrack produced by Sean ‘Oneson’ Washington, and a jam-packed history and humanities lesson in a sobering 90 minutes, this is a wholly personal and consciousness-expanding documentary told in a direct and moving way about a genocidal act whose impact still reverberates today…

Christopher Everett’s directorial debut is an un-pretentious, direct, and minimalist portrait of the terrifying coup d’état created by the white North Carolina Democratic Party in an attempt to broker the lives and future of Wilmington and eventually the entire state on November 10, 1898– ensuring the legacy and rebirth of a rekindled and acknowledged form of legally sanctioned racism, 35 years after the civil war and the USA’s official outlaw of slavery.   As Dr. Umar Johnson fluently explains, after the Civil War in 1865 – a  cloud hung over the Ex-Confederate Southern white men who couldn’t bring themselves to accept the fact that they had lost a war – not to President Lincoln or the Yankees up North but to their own former slaves! The Union never would have won the Civil War had it not been for the Black soldiers who fought for themselves and on behalf of the Union.

In retaliation and exasperation, white supremacists who governed the Democratic Party in North Carolina sough to retaliate and officially instill a racist system that had been supposedly eradicated some 30 years prior as a result of the Emancipation Proclamation.  The confederates’ dream to restore White unity and Black servitude reached such a grizzled mania that an impassioned yet calculated plot to excise the Black businesses and citizens of Wilmington completely.  Independent researcher Kent Chatfield shows us copies of WB McKoy’s pamphlet of 1897 of The White Government Union constitution and bylaws created by the North Carolina Democratic Party whose sole aim was to instill white supremacy government.

We learn in Wilmington On Fire that the White Government Union was a more urbane and far more treacherous terrorist organization than its backyard cousin the Ku Klux Klan for example.  These were men who were out for blood, had serious connections and money, and were not going to stop until they removed all Black powerbrokers, cultural influence, and existence in Wilmington, North Carolina. The White Government Union’s de-facto militias – known as the “redshirts” – once again, unlike the Klan did not hide their faces and acted like savage storm-troopers upon the African-American community and, as the Nazis did, acted in accordance with some of the most strategic and wicked propaganda put forth by white racists in Wilmington in order to stir up hate and fear against the Blacks.

The film opens with Ness Lee’s powerful track, “Voice of The Regular People” produced by Illastrate with sampled echoes of Curtis Mayfield’s inimitable falsetto heard wailing, “I’m going to war to find my brother!” is well used here and the closing number of the film has one of the best uses of anthemic protest music that I can think of in any movie since Children of Men’s closing with John Lennon’s “Free The People.”  The closing number by James Diallo (produced by Michael ‘Sarkastix’ Harris) in this case is the original and haunting, “It’s a Massacre” – an atmospheric hip hop tune that is as defiant and soulful as the film itself. Matthew Head sparsely and confidently scores the rest of the music. 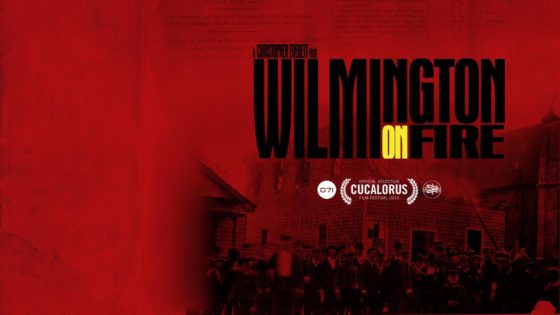 Wilmington On Fire was made to enlighten, inform, and arouse interest in not only a slice of American history, but also a deeply troubling event that has been swept under the carpet and seldom mentioned.

“Outsider Artist” and independent art advocate Dennis LeRoy Kangalee is a screenwriter, poet, and human rights activist. He is best known as the director of the cult film As an Act of Protest.  His recent short avant-garde films include Endless Shards of Jazz for a Brutal World and Timbre of The Hour.

He can be reached at www.dennisleroykangalee.wordpress.com