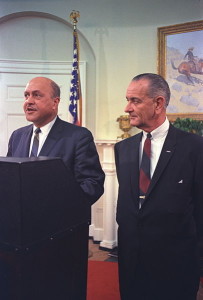 On this day in 1966, President Lyndon B. Johnson appoints the first African-American cabinet member, making Robert C. Weaver head of the Department of Housing and Urban Development (HUD), the agency that develops and implements national housing policy and enforces fair housing laws. In keeping with his vision for a Great Society, Johnson sought to improve race relations and eliminate urban blight. As many of the country’s African Americans lived in run-down inner-city areas, appointing Weaver was an attempt to show his African-American constituency that he meant business on both counts.

Weaver’s expertise in social and economic issues concerning urban African Americans was well-known. Prior to his appointment as HUD secretary, he held key positions in several Democratic administrations. Under Franklin D. Roosevelt in the mid-to-late 1930s, he advised the secretary of the interior and served as a special assistant with the Housing Authority. In 1940, he was appointed to the National Defense Advisory Commission and worked to mobilize black workers during World War II. From 1955 to 1959, Weaver served as rent commissioner for the state of New York, then went on to serve as head of the Housing and Home Finance Agency under President John F. Kennedy.

As HUD’s senior administrator, Weaver expanded affordable housing programs and, in 1968, advocated for the passage of the Fair Housing Act, which prohibited discrimination against any person in the terms, conditions, or privileges of sale or rental of a dwelling, or in the provision of services or facilities in connection therewith, because of race, color, religion, sex, familial status, or national origin. Weaver and Johnson shared the goal of revitalizing America’s urban areas through improved housing, the creation of inner-city parks and support for African American-owned businesses.